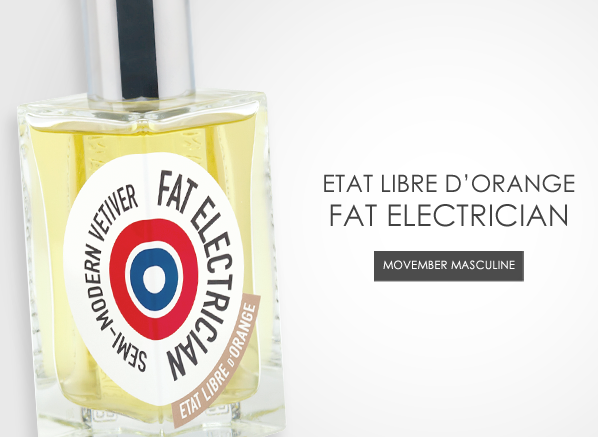 Tis the very final week of Movember and many a man across the country will be poised to make perhaps the most important decision of their lives – to keep the mo or to not keep the mo. It’s a toughie and one has the option of putting up with the relentless grooming and occasional itching along with the serene sense of manliness that accompany this or just to shave it off in a blaze of glory. I can confirm that I will be opting for the latter because unfortunately for me, my mo doesn’t look anywhere near as spectacular as it feels uncomfortable. Oh well, dear Mo, there’s always next year!

Etat Libre d’Orange is the first brand one things of when one wants something more contemporary and even a little odd. They are the rebellious perfume brand, sitting at the back of the bus and shooting peas at the rest of the perfume world, daring to be different and not at all afraid to distance themselves from the pack.

In terms of masculine fragrances, Etat Libre d’Orange has a fair few (although, in truth, most of their scents are entirely unisex) that are suitably impressive, Tom of Finland, Rien and Je Suis un Homme to name just a few, but by far the most enjoyable and surprising is the fragrance they dub as being their ‘semi-modern vetiver’ – Fat Electrician (Antoine Maisondieu, 2009).

“A Midnight Cowboy lost on city asphalt. A fisherman without a line, he was made to be hooked by others, to believe in his fate without knowing it, to wreak havoc and forget it over time. Youth for women-of-a-certain-age, stock for late-night parties, a partner to accompany the wealthy of Palm Beach on nature walks, his splendor is consumed in the service of others. Now, a Fat Electrician in New Jersey, his talent depleted in his sexual decline.” Etat Libre d’Orange

It’s hard not to like any perfume with as ridiculous a name as ‘Fat Electrician’ and thankfully for us the scent lives up to both the strange moniker it has been bestowed and the slightly pretentious description. It is after all a relatively modern vetiver, but instead of being presented in a bracingly fresh on harshly green setting as the note so often is, in Fat Electrician the vetiver is oily, salty and unctuous.

The vetiver is mixed with weighty notes such as myrrh and opoponax that really cement it to the skin, allowing for a slow and languid progression. These notes also amplify the smoke that the vetiver exudes, spurting out thick and dark green tendrils of spicy, salty and ever-so-slightly metallic grass.

Fat Electrician is not much of a shape shifter though and the changes that take effect with time are, for the most part, rather subtle. The biggest shifts are within the hefty base, where the creamy (but albeit rather dry) note of vanilla intensifies to such a point that it outweighs the more robust resinous ingredients. The result is a vetiver-tinged swirl of vanilla that lacks sweetness but has incredible texture, so incredible in fact that it almost has the feel of an exotic savoury treat.

Etat Libre d’Orange states that the loss of beauty is the inspiration for Fat Electrician – he is the man who, in his prime, was a bit of a stud, but now is a shadow of his former self. In reality though, this fragrance is something different altogether and displays an unconventional, almost stealthy beauty that isn’t immediately recognisable. It’s almost as if this Electrician is the handsome friend that you’ve never really noticed before or perhaps is the kind of man whose electric personality lights the unique features of his face. Beauty is not lost here, it’s simply waiting to be discovered.

If Fat Electrician were to rock a moustache for Movember he would most definitely go for something completely off the wall. Personally, I’d recommend the John Waters pencil-thin lip-skimming moustache for a guy who isn’t afraid to be different. He’d wear his moustache with pride and like a true rebel he wouldn’t care what anyone thought of it.

This scent is so Original! Like all ELdO perfumes, but this one, although simple and under-stated, is enchanting! It has the most imperceptible lemon scent, because it's not aquatic. It has a balance and harmony that I would call ti spiritual. Inoffensive scent with the right intensity. It' s not for people who like sweet indulgence or aggressive freshness. It is Balanced and absolutely unisex.

This entry was posted on Wednesday, November 27th, 2013 at 9:00 am and is filed under Candy Perfume Boy, Fragrance, Men, Tried & Tested. You can follow any responses to this entry through the RSS 2.0 feed. You can skip to the end and leave a response. Pinging is currently not allowed.

@escentual Up to 1/3 off French Pharmacy ends at midnight!⏱ Who else loved Kylie Jenner's JPG fragrance inspired dress for the… https://t.co/I7cumBDT1C
5 hours ago • reply • retweet • favourite

@escentual Did you know that we're a Cardiff based premium beauty retailer? 🏴󠁧󠁢󠁷󠁬󠁳󠁿
13 hours, 14 minutes ago • reply • retweet • favourite