M Is for Mugler – The Fragrance A-Z 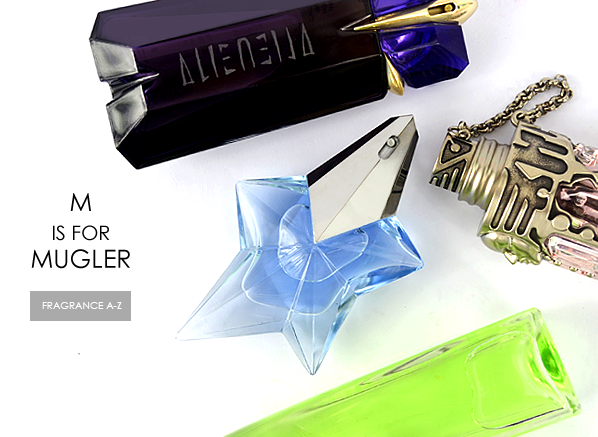 M is for Mugler…

In my Escentual A-Z I have spoken about many iconic perfume houses; from the fusion of oriental mysticism and French tradition that is Amouage, to the couture style of Dior and effortless classicism of Guerlain, but the one I have been itching to sink my teeth into on your behalf is Thierry Mugler – my favourite of all perfume brands.

Thierry Mugler is a French ballet dancer turned fashion designer that approaches the world of fashion in an entirely unique way.  He celebrates all that is futuristic, fetishistic and downright fabulous.  His highly sculpted designs (from the motorcycle corset to the powerful zoot suit) defined the fashions of the late ‘80s and early ‘90s and in many ways his perfumes are just as bold and entertaining.

The Thierry Mugler brand started in 1992 with the launch of Angel and today it only has four standalone fragrances on the market (not including the gazillion and one flankers).  But this is a brand that believes in quality over quantity and each of Mugler’s four perfumes are audacious trendsetters that approach the art of olfaction with no sense of fear.  They are iconic perfumes that celebrate the extraordinary and revel in the excesses of the world.  To put it simply, Mugler fragrances are the catwalk models and superstars of the perfume world. 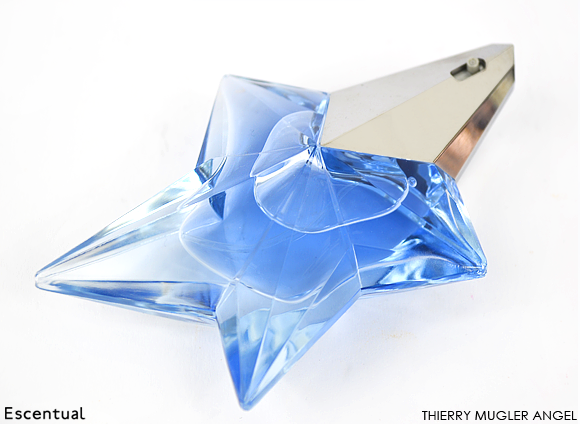 The perfume industry wasn’t quite ready for Thierry Mugler’s first perfume launch in 1992.  Nothing could have prepared the unsuspecting noses of the public for the olfactory experiences they were about to feel and nobody was aware that among the stars an icon was stirring, ready to be born.  In fact, even when she was born, Angel took a while to stick and thanks to Mugler’s slow launch (releasing the perfume in only a small number of doors across the world) time was allowed for Angel’s reputation to build, and slowly, but surely people started whispering her name.

Inspired by Mugler’s childhood memories of fun fairs, Angel celebrates the duality and strength of women, pairing sweet notes of passion fruit, chocolate, caramel, vanilla and candyfloss with a stonking big and masculine patchouli note.  The result is an olfactory drag queen that is Amazonian in its presence.  Imagine RuPaul in a giant wig, glittery couture gown and 9 inch heels and you’re on the right track.

What makes Angel so iconic is the fact that it is such a divisive fragrance.  To quote an old cliché – you either love it or you hate it.  It’s also immediately familiar and carries an olfactory signature that has inspired a generation of copies (most notably; Viktor & Rolf’s Flowerbomb and Chanel’s Coco Mademoiselle).  She’s often intimidated but never duplicated – the iconic star with a fearless thirst to ensnare those that wear her.  No wonder then,  that Mugler launched Angel with the tagline – ‘beware of Angels’.

Four years after Angel’s launch in 1992, Mugler hired the talents of perfumer Jacques Huclier to create the masculine clone to his already iconic feminine fragrance.  For A*Men (or Angel Men as it is also known), Mugler again looked backwards to his childhood for inspiration, picking out his love of comic book heroes as inspiration for the masculine Angel.

It is no surprise then that A*Men is a whirlwind of a scent – a tour de force that cannot be stopped.  It follows the ‘everything including the kitchen sink’ approach to perfume, throwing in a ton of olfactory elements that shouldn’t work together but miraculously do.  Peppermint, chocolate, lavender, coffee, tar, patchouli, vanilla and musk all come together in a robust, steroid-fuelled explosion of perfume robotics. 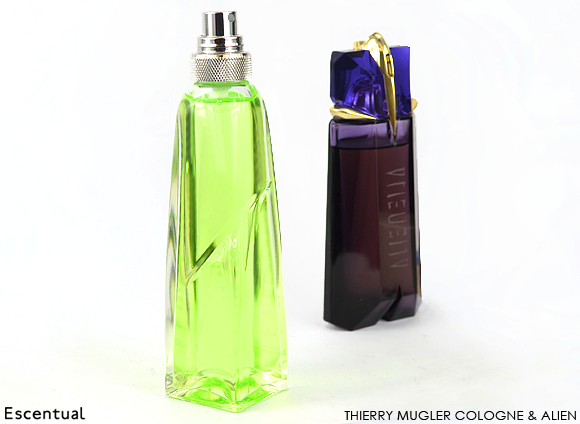 In 2001 Thierry Mugler stepped away from the drama of Angel and the chaos of A*Men to launch his most surprising perfume – ‘Cologne’.  His Cologne, inspired by a soap Mugler found in Morocco, is the antithesis of everything else the brand had done before and has done since.  But that’s not to say that it is a traditional take on Eau de Cologne – this is Mugler after all and if there is one thing to learn when exploring this most high-fashion of brands, it’s that nothing is as it seems.

Mugler’s Cologne is a thoroughly modern cologne that manages a satisfying equilibrium between old school notes of citrus & vetiver and the contemporary and startling feel of steamy musks.  The whole thing feels so crisp and clean that it creates an experience akin to stepping out of a shower into a cold and steam-filled bathroom.  There’s also a degree of cohesion between these two opposing parts, with a metallic sheen to the vetiver that is beautifully merged with the dewy nature of the citrus.

But our friend Thierry wouldn’t allow for an entirely ‘clean’ experience.  After all this is the House of Mugler we are talking about and they are not known for shying away from the dangerous, dirty and downright bizarre.  Cologne boasts of an ‘S’ note that adds a degree of filth, not in an animalic way, but in more of an unsettlingly saline and human way.  I’ll leave you to think about what that ‘S’ could possibly stand for…

Mugler Cologne is an Eau de Cologne from space.  A cologne for a genderless alien that is equal parts masculine and feminine.  It’s a perfume for those who are fearless in their admiration for scent, even when it is at its most ethereal.  This is a cologne for the Muglerati.

Unlike most brands, who would be quick to capitalise on the success of a scent such as Angel, Mugler took a more patient and measured approach to his second pillar feminine fragrance, waiting a whole 13 years before releasing a follow up to Angel.  Still looking to the stars, this long-awaited follow up was dubbed with the striking name of ‘Alien’, using the same first letter and number of letters as Mugler’s debut scent, in a display of synergy, but hinting at a new experience entirely.

Alien couldn’t be a more different fragrance from Angel however, and whilst it shares a remarkable tenacity with its forbearer, this extra-terrestrial perfume contains none of the gender-bending tendencies of its sister.  The main crux of Alien is a skyscraper of a jasmine note that is syrupy, wine like, wonderfully diffusive and turned up to full volume.  This isn’t any jasmine you’d find in nature; in fact I’m pretty sure that it is a particular eclipse-blooming kind plucked from the toxic purple marshes of Jupiter by Mugler himself.

But Alien isn’t a perfume all about jasmine; it is first and foremost a perfume of tension.  This pressure comes when the jasmine meets cashmeran, a synthetic ingredient that is reminiscent of musk and blond woods.  The cashmeran brings an arid sense of dryness that is relatively smooth and really tempers the vivacity of the jasmine, creating a blinding white solar effect that is absolutely like nothing else experienced in the universe.

Alien is a perfume that feels as high-fashion as Mugler’s classic couture pieces and it stands apart from many other mainstream feminine fragrances due to its completely unique olfactory signature.  There is nothing that smells like it and there never will be.  All hail the Alien Queen! 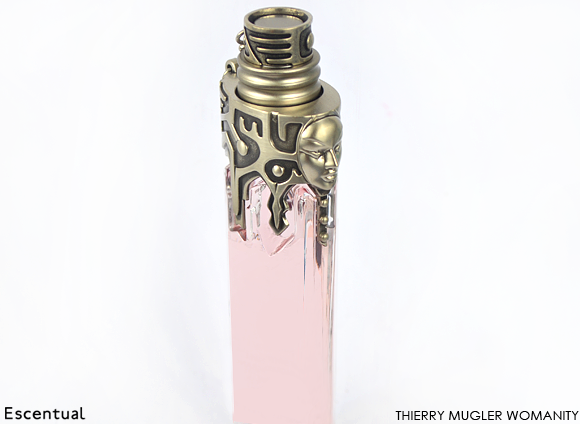 Mugler’s boldest statement came nearly 20 years after the launch of Angel in the form of Womanity.  Even if one considers the fact that Mugler’s Womanity is the sister of two rather unusual and unconventional perfumes – Angel and Alien – it still comes as a shock.  To put it simply, Womanity is a pretty weird scent and one that successfully marries conventional ingredients with notes that are altogether a little more unsettling.

Created to evoke the bond between all women, Womanity is composed of three main accords; fig, caviar and woods.  It opens with juicy orange fruit and milky fig, evoking the image of fruity pith being squashed between one’s hands.  The caviar is present throughout and adds a marine saltiness and palpable biscuit/bread-like texture that is yeasty but works incredibly well with the tartness of the fig.

What makes Womanity so surprising as a scent is that it manages to have huge projection (and I really do mean HUGE) whilst remaining fresh and transparent.  It truly is a marvel of perfumery and much like Angel, which came long before it, Womanity is a slow burner of a scent that I believe will get the recognition it deserves in the fullness of time.  It really is nothing short of a modern masterpiece.

What is your favourite Mugler scent?

This cologne has been around for ever.Do you know why? It's because it is the most sexyest smell for a man.The cologne stays beautiful all day long and it is fresh and not to heavy for any time of the day. Guess what,ladies can wear it to.

This entry was posted on Wednesday, January 22nd, 2014 at 1:49 pm and is filed under Brand Focus, Candy Perfume Boy, Fragrance, Guest bloggers, Men, Spotlight On. You can follow any responses to this entry through the RSS 2.0 feed. You can skip to the end and leave a response. Pinging is currently not allowed.

@escentual @whatlauraloves Thanks so much for being part of our #SunPoverty SPF Application video, Laura! ☀️❤️
2 days, 9 hours ago • reply • retweet • favourite

@escentual Where have you clipped your #SunPoverty Escentual SPF50? Show us using #HowDoYouClipIt or join the challenge on our… https://t.co/MN5GURH5ul
3 days, 8 hours ago • reply • retweet • favourite