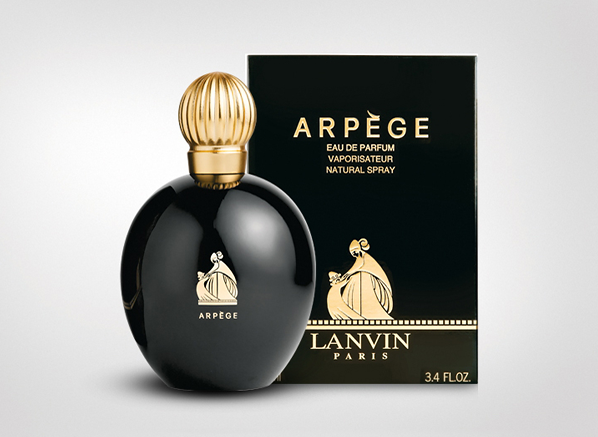 I was rummaging through my rather disorganised perfume collection last week, with a view of finding something interesting to wear.  Now, you’re probably thinking that someone who is as much of a perfume nerd as I am would not be short of intriguing scents to sniff, and you would be absolutely right, I do.  But an extensive choice can sometimes be overwhelming (a first world problem if there ever was one) and on occasions one has to refer to the classics to seek solace from all of the noise brought by the new and it can often be thoroughly rewarding to rediscover time-honoured perfumes.  So this is the exact reason why I felt so refreshed and elated when I stumbled upon my much loved but so often neglected bottle of Lanvin’s Arpege.

Arpege was launched by the French fashion house of Lanvin in 1927 and was created by perfumer André Fraysse (the perfume responsible for all of Lanvin’s earlier scents, such as My Sin and Scandal) upon the request of Jeanne Lanvin for her daughter’s birthday. Arpège (which takes its name from the arpeggio)is a perfume of the most special kind, created out of the purest love and given as a gift to chronicle the timeless story of a mother’s love for her child.

Perhaps the most interesting thing about Arpege is that, whilst it is arguably one of the greatest perfumes of all time and easily sits up there with classics such as Guerlain’s Shalimar and Chanel’s N°5, it isn’t talked about anywhere near as much as its contemporaries, nor does it seem as popular today.  The truth is that Arpège has aged rather well and its supple aldehydic floral tones feel strikingly genderless today, making for a throwback floral that would feel perfectly comfortable on any perfume lover (male or female) who may be looking for something with a bit of a vintage edge.

Like most classic florals of its kind, Arpege opens with effervescent aldehydes and citrus notes.  Aldehydes bring a champagne-like fizz to most fragrances but in this particular perfume they simply add a soft, velvety sheen to the proceedings that shimmers rather than bubbles.  This means that when compared to other aldehydic florals, namely N°5 (or even N°22 – Chanel’s Queen of aldehydes and flowers), Arpège feels less bright, more supple and warmer.  Perhaps it’s the maternal aspect of the story of the perfume’s creation that instils it, but Arpège certainly feels like a comforting embrace from mother, and especially so in the top notes.

Flowers play a big part in Arpege’s composition, forming the heart notes that lay beneath the glimmer of the opening.  When the perfume was created, Jeanne Lanvin aimed to “transcend nature itself to create a new flower, a culmination of all the best nature has to offer”, and in keeping with this theme, Arpège presents itself as an abstract floral bouquet rather than a botanical catalogue of individual blooms.  Jasmine, with its astringent, heady and narcotic signature feels the most prominent but there’s also a touch of something earthy akin to rose and a touch of iris powder to extend the perfume’s overarching sense of softness.  But this is not a ripe floral bouquet that sings with crisp, green freshness, far from it in fact, as Arpege gives the impressions of flowers just past their peak, where the richness of pollen and fragility of wilting petals whisper their swan song.

As it dries down, Arpege becomes warmer and takes on a more resinous character that is thankfully devoid of much sweetness.  Stripes of earthy and spicy vetiver (an odour that only appears in horizontal lines) streaks through the plusher aspects of the perfume’s base materials, emphasising the auburn edges of the over-ripe petals and creating a contrasting sharpness that lifts Arpege from being overtly plush.

Smelling Arpege now, after what must have been at least 12 months of shamefully ignoring it, I find it really easy to see why the perfume still exists today, 87 years after its launch.  Some tunes are so satisfying that they are timeless and Arpege hums a ditty that is as enjoyable, if not more so, than many of the other classic fragrances one can buy so easily.  It’s the ‘Nimrod’ of the perfume world, playing out a beautifully orchestrated set of notes that are pleasing, even to the most unwilling of noses.

All required information available from website. Product A+++ Wife delighted with gift wrapping and message.

This entry was posted on Wednesday, April 30th, 2014 at 11:35 am and is filed under Candy Perfume Boy, Fragrance, Guest bloggers. You can follow any responses to this entry through the RSS 2.0 feed. You can skip to the end and leave a response. Pinging is currently not allowed.