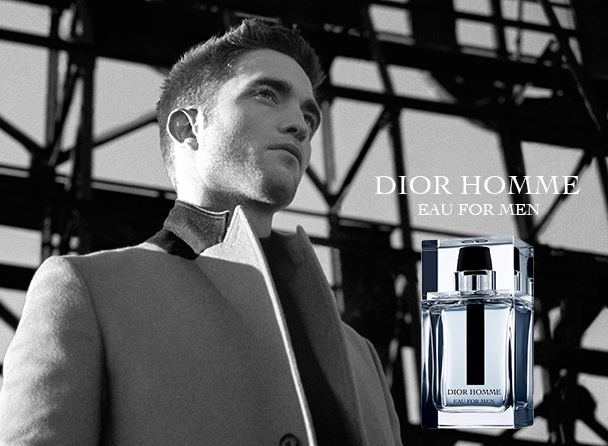 In masculine perfumery there are a wealth of fragrances created in styles to suit every demeanour found within the common male.  There are barbershop fougères for spiffy dandy folk (see Houbigant’s Fougère Royale), rustic orientals for those in love with equestrian sports (see Guerlain’s Habit Rouge) and even steroid-filled bastions of god-like testosterone (see YSL’s Kouros), so it’s safe to say that whatever type of man one is, there’s a perfume out there to suit each facet of one’s personality.

The house of Dior is also a purveyor of varying masculine characters, and in their wardrobe of perfumes one will find scents for the debonair male (Eau Sauvage), the rugged rebel without a cause (Fahrenheit) and perhaps most notably, the modern man (Dior Homme).  With Dior Homme, Dior created a fragrance that celebrated the duality of the modern man (a species that is known for grooming and preening just as much as its female counterparts) in a fragrance that juxtaposes the masculine and the feminine. It is arguably one of the greatest masculine perfumes of our time and most definitely tops this writer’s list of most loved manly fragrances.

For 2014, Dior has launched a new and lighter interpretation of their androgynous flagship masculine, Dior Homme.  Entitled ‘Dior Homme Eau for Men’ and billed by Dior as a fragrance that it is “defined by its urban edge and immediate charm”, this flanker yet again shows Dior’s ability to capture the essence of a multi-faceted masculine personality in a fragrance that simultaneously manages to capture the Dior Homme DNA but also feel as if it was created for a different man entirely. 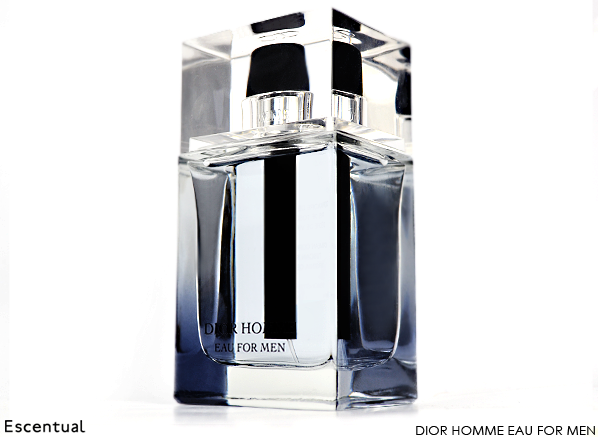 If you’re anything like me, the sheer sight of the word ‘Eau’ before the name of your favourite masculine is most likely to send you into fits of worry that your beloved has been stripped of all that makes it good and great, and replaced with a watery, thin citrus mess.  Now on nine out of ten occasions one can be forgiven for this flanker-induced fear, but as we all know, the house of Dior is a bit more scent savvy than most, so it will be no surprise that Dior Homme Eau for Men is a pretty faithful rendition of the flagship fragrance from which it takes its name.  It’s lighter, yes (it is an ‘Eau’ after all) but it succeeds in remaining instantly recognisable as Dior Homme, retaining the fragrance’s signature but instead presenting it as something much more business like.

In the opening, Eau for Men feels very much like Dior Homme (i.e. powdery sweet) but it’s drier and definitely more herbal.  The lavender that was so prominent in the original is still present, but it is overshadowed by the subtle zing of citrus notes that remove the feel of caramelised petals that was such a strong presence within Dior Homme.  But what does remain is the silky, delicate feel of the original, a texture that ensures that this Eau is just as smooth and finely crafted as its forbearer.

The delicate powder of iris continues to be at the core of Eau for Men however, instead of being painted in suede-like hues of sepia, the note here is less full-bodied, less reminiscent of make up powder and much colder.  This is an urban iris that appears in shades of steely blue and evokes the image of a suited and booted gent with a more serious and less emotionally charged personality.  What does remain is the feminine edge that the iris provides and it very much still delivers that daring moment where the lines between the male and the female blur to make way for an androgynous accord that really is thoroughly modern.

Eau for Men diverges away from the original as it transitions into the base.  The angular note of cedar with its spicy and intensely woody inflections takes precedent and contrasts nicely with the plush quality of the iris, and the sweet, herbaceous nature of the coriander.  The ‘woody’ feel is decidedly more prominent and robust than the base notes of the original, which makes Eau for Men a more robust and less delicate affair all round. 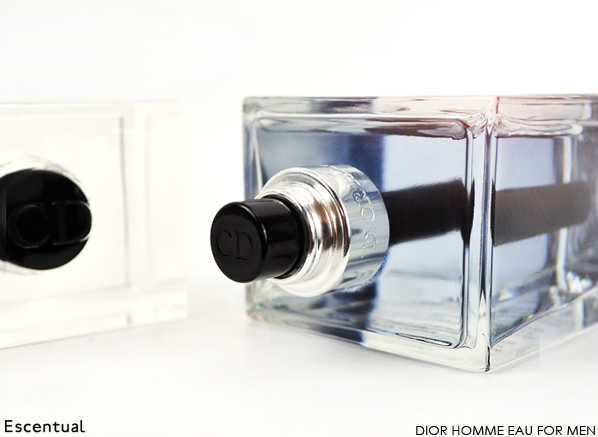 Dior’s Eau for Men is a refreshing launch, in the sense that it portrays the key elements of Dior Homme in a lighter and more subtle manner without dumbing the fragrance’s signature accords down to create a wider appeal.  The fragrance is dressed in steely blues and icy greys and feels very much like a more serious and work-friendly interpretation of the original. If Dior Homme is the soft-skinned man who has a love for the finer, more beautiful things in life, then Eau for Men is his high-flying banker brother who spends his days gracing the City with his impeccably tailored appearance.

Eau for Men is a worthy addition to the Dior Homme line-up, and whilst I’d always opt for the original (I am incredibly loyal to my beloved Dior Homme, you see), this new flanker certainly has a place next to it for the man that feels his personality is something altogether more sophisticated.

An excellent re-creation from perfumer Francois Demacy (who reformulated this one in 2012; the fragrance also suffered several other reformulations in the past). It is actually a completely different fragrance from the "Fahrenheit" signature series by Dior. Dior Homme opens with the iris note and in the early stages it gives off that lipstick scent that this fragrance is famous for; after about an hour it begins to warm up but it still holds on to the iris note. About 1 hour and a half into the drydown, you will notice a cocoa note starting to emerge which then turns into a slightly warm, cocoa lipstick is just great. About 4 hours into the drydown and the slight warmth of the fragrance tones down as does the iris/lipstick note. Cocoa gets more proeminent, turning the fragrance into something beautiful. At this stage the fragrance actually turns unisex. Can be easily worn by women as well. The longevity is above average (6-8 hours) and the sillage is goodf for a fragrance of this intensity (you get a good scent cloud of about 3 hours then turns a bit into skin scent). It doesn't blast off the skin, but instead leaves a nice scent trail. You and the persons nearby can enjoy this noble scent for a whole evening, without having to dig the nose in the skin or the shirt. This is the essential idea in making perfumes, as the word 'per fumum' says, nowadays is actually so often ignored. Compliment factor is good. Mainly because this is a well crafted fragrance. It evokes class and luxury. Bottle is well made and the sprayer is very good. What are the differences between 2012 reformulation and original DH? Actually there have been more reformulations before the 2012 one. There are some slight differences between the old and new versions of DH, yes. The vintage opens up with a powerful iris, where the last reformulation hangs on to the iris less longer. You do get cocoa stronger than in the vintage one and it also takes a bit less to develop. When to wear Dior Homme? Indeed it is for those special occasions or for romantic dates. Can be used daily but not really versatile for office wear. Why would you hate Dior Homme? You might not enjoy this fragrance due to its initial blast of lipstick given by the iris note, blended with other notes. There are plenty of negative opinions due to this. So if you dislike the iris, there is a fair chance that you will not like this. Sample before you buy. What season to wear Dior Homme? It is mainly cold weather scent, but due to its smooth and warmth, can be used in warmer evenings (spring especially). It is not really suitable for hot summer as the iris blast can be found overpowering. A top fragrance needs a special dressed man. Therefore if you spray Dior Homme. avoid sports-wear or hoodies. Choose to dress with casual shirts or blazers and nice jeans. Can be worn on formal occasions or on really important occasions such as weddings (just avoid wearing it in a hot weather). Very good for romantic wears but go easy on the trigger. Conclusion: High quality? Seductive? Absolutely! Sexy? So and so, it is rather elegant and shows class. It's woody, sensual, warm, not totally masculine, but rather unisex in drydown. 4.8/5

This entry was posted on Wednesday, May 14th, 2014 at 9:08 am and is filed under Candy Perfume Boy, Fragrance, Guest bloggers, Men. You can follow any responses to this entry through the RSS 2.0 feed. You can skip to the end and leave a response. Pinging is currently not allowed.