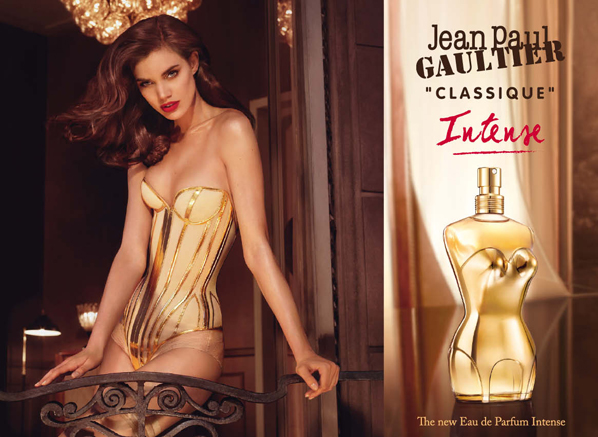 Jean Paul Gaultier’s flagship feminine perfume, Classique, is most definitely a modern classic.  Launched in 1993 and having celebrated its 20th birthday last year, Classique has stood the test of time when lesser fragrances have wilted and disappeared from the market.  Housed in Gaultier’s iconic bodice bottle (which largely took inspiration from Schiaparelli’s much-missed Shocking) and created by venerable perfumer, Jacques Cavallier (responsible for; L’Eau d’Issey, Kingdom, Stella, Nu, Le Feu d’Issey – an extensive list full of modern classics), Classique is a boudoir oriental filled with powder puffs, silky flowers and plush vanilla.  Classique smells opulently feminine in a way that few other fragrances do and it perfectly captures the essence of Gaultier’s brand – those powerful, conical bustiers and that naughty sense of erotic fun.

This year, Gaultier has launched a new version of Classique called ‘Classique Intense’, and it proves to be a very interesting take on the fragrance’s signature.  Created by perfumer Francis Kurkdjian (another ‘dude’ of the perfume world whose back catalogue reads like a greatest hits of perfumery), Classique Intense contains 40% of the original Classique’s DNA, but ultimately presents an entirely new fragrance that is a complete twist on the Classique we all know and love.  A twist that is full of glitter and gold. 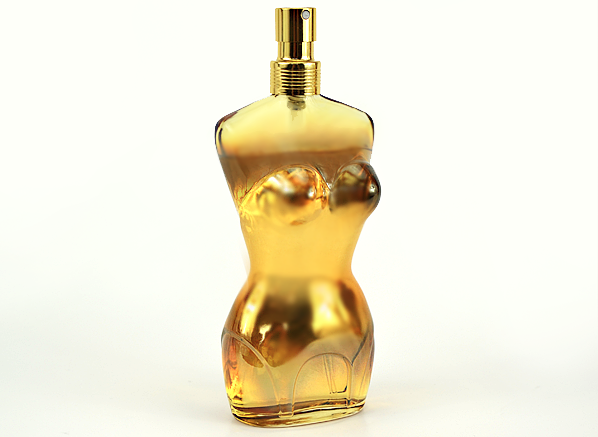 First things first, let’s clarify that Classique Intense isn’t really a more ‘intense’ (for want of a better word) version of the original, instead it opts to play up the radiantly floral aspect of Classique to make it a brighter and more statement-making fragrance that isn’t deeper or heavier, as the name would suggest.  This approach is unique in a way, and allows for freshness and a zesty sparkle to become loud and prominent, giving a nod to the big, shimmering florals of the ‘80s, but displayed in an ultimately more clear and modern manner.

Classique Intense opens with white flowers and citrus fruits.  The flowers are rubbery, spicy and green, and the fruit is biting, sweet and sharp enough to cut straight through the fleshy petals of Intense’s flower garden.  There’s a subtle undercurrent of pepper that crackles away and adds a touch of darkness to the overwhelming sense of golden radiances that is so ingrained within the fragrances’ signature.  In short, it’s a fruity, flowery and sparkly affair.

Perfumer Francis Kurkdjian has a knack for creating ultra-modern feminine fragrances that burn with a bright glow.  Classique Intense is the latest edition to his light-bearing oeuvre, joining perfumes such as Elie Saab Le Parfum(an olfactory solar flare) and Carven Le Parfum (a fragrant recreation of the cold light of dawn) as well as his very own Amyris Femme (powdered sunlight) and feminin Pluriel (the best thing thing I’ve smelled this year).  The difference here though, is that Intense feels a bit creamier and thicker, with a milky texture that runs throughout, making for a softer approach.  In fact, this golden milk, with its narcotic heart of jasmine, orange blossom and tuberose, wouldn’t be out of place in Cleopatra’s bathtub.

As it settles into the base, the vanilla becomes much more prominent.  What is utterly fabulous about the use of the note here is its transparency – where vanilla is so often misused and turned into a cloying sponge cake-esque mess that wouldn’t be out of place within a Yankee Candle (not a compliment, FYI), Classique Intense displays a delicate vanilla water that captures the note’s sweet and spicy facets in equal measure.  The effect is akin to a mist of vanilla, infused with the delicate air of fresh white flowers.  Sounds nice, huh?

I’m quite fond of Classique Intense.  I like how it’s not a traditionally ‘intense’ version of the original and how it shows the fragrance from an entirely new angle, almost as if Classique is the showgirl in her boudoir post-show, re-applying the rouge, and Intense is the starlet on stage, glittering in her golden corset adorned with a thousand sequins.  Where many flankers leave one wondering what purpose they serve, Classique Intense simply makes one feel glad that it exists.  It’s quite beautiful, too, and the world can never have too much beauty.

I love this perfume- its so elegant and classy, perfect for any sophisticated woman!

This entry was posted on Wednesday, August 13th, 2014 at 2:12 pm and is filed under Candy Perfume Boy, Fragrance, New products, Tried & Tested. You can follow any responses to this entry through the RSS 2.0 feed. You can skip to the end and leave a response. Pinging is currently not allowed.

@escentual Our tip to get through #BlueMonday is to spray your favourite mood-boosting fragrance. What scent have you got on t… https://t.co/xzWEQURcKs
3 days, 3 hours ago • reply • retweet • favourite