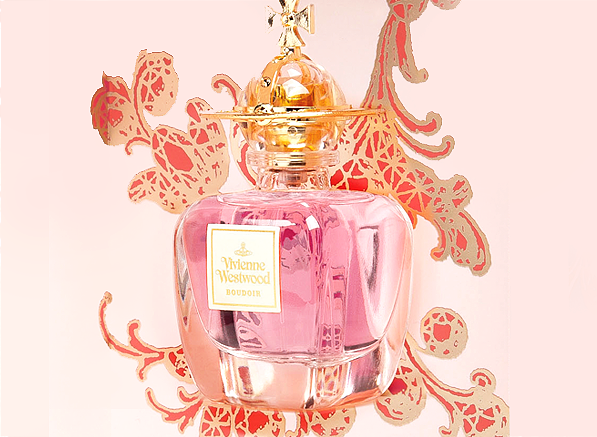 Dame Vivienne Westwood is a national institution.  She’s as much part of the eccentric fabric of British life as Builder’s Tea, Wimbledon and Queen Elizabeth II, her very self.  Brits love Viv (may I call her ‘Viv’, I wonder?) because she’s a rebel.  She is the mother of punk and the matriarch of British fashion.  Punk, activist, genius – there are many ways to describe the world’s coolest Dame but I think I’ll just settle on ‘legend’.  As a self-taught designer, Westwood has crafted one of the world’s most iconic fashion brands, one that creates unusual and form-changing clothing quite unlike any other.  So yes, ‘legend’ it is.

Vivienne Westwood’s fragrances have been as punk as her clothing.  So punk, in fact that many failed to resonate with mainstream consumers and have since been discontinued.  In her olfactory graveyard, Dame Viv has wonderful fragrances such as; Libertine, a free-spirited floral that was lemony and fuzzy, Anglomania, a thai-spiced rose covered in milk and wrapped in plastic, and Let it Rock, a sharp, biscuity take on Shalimar, all of which are sadly no longer with us.  Each and every one of these scents was great and trés Viv, but none quite live up to the beauty, balls and daring of Westwood’s most famous, and longstanding fragrance: Boudoir.

Boudoir was Vivienne Westwood’s debut fragrance and it’s also the only one of her older fragrances still in production. Boudoir launched in 1998 and was created by perfumer Martin Gres.  It is reported that Westwood asked for something that smelled like certain parts of the female anatomy, although this may be urban legend.  The scent came around the time of Westwood’s Five Centuries Ago (Autumn/Winter 1997-98) and Tied to the Mast (Spring/Summer 1998) collections, both of which “explored the way that revealing glimpses of the undergarment – such as the chemise – suggested a state of déshabillé”, [1] so it’s safe to say that ‘demure’ and ‘wallflower’ were not words included within the brief.  Seeing as our Viv was working in a world of déshabillé, it makes sense that Boudoir is a scantily clad vixen rocking a Vivienne Westwood bustier. All lust and lacquer, and no shame, that’s Boudoir. 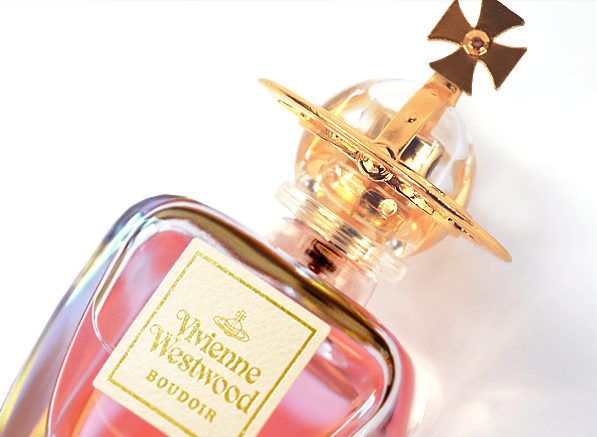 Those of you who are of a fragile constitution should probably look away now.  This review is not going to be polite.  We are stepping firmly into the boudoir here and there may be a reference or two to underwear, shenanigans and buxom beauties within this intimate space, for Vivienne Westwood Boudoir is a wonderful place full of silk sheets and sleepovers a plenty.  There are no rules here except for look good, smell good and misbehave like there is no tomorrow.  So, let’s do exactly that!

Boudoir opens sweet and loud – and I mean LOUD.  It diffuses out of the sprayer in a mushroom cloud of rouge and aldehydes, evoking the idea of a beautiful woman sat at her dressing table putting on her war paint and fixing her gravity defying hair do.  You can almost see the crystal bottles of perfume, lotions and potions and powder puffs littered across the table.  Yes, it’s something straight out of Dynasty, but nowhere near as tacky.  The aldehydes add sparkle and sheen, sending all of that sweet powder whooshing into the air in a glamorous whirlwind of feminine beauty.

Of course, all of that airiness and sweetness must be tempered with warmth and depth, two qualities that Boudoir possesses in satisfying quantities.  The core of the fragrance is a wonderfully rich and heady bouquet of flowers that is sharp, syrupy and pungent in a pollen-filled manner.  An overdose of rose complements the bouquet, accentuating the sweetness and adding a plush, velvety texture to the mix.  In the heart there’s also an ashy tobacco-like note that hints at lipstick-stained cigarette butts elegantly stubbed out in a crystal ashtray – she likes to smoke when she paints her face.  How’s that for evocative?

Underneath the rouge and next to the overflowing ashtray lies what I like to call ‘Boudoir’s dirty secret’, i.e. the animalic section, which as you may have expected by the tone of this review, is pure and utter filth.  The main culprit here is cumin, that funky smelling spice that is purely evocative of sweaty skin.  Here, the cumin creates the impression of silky underwear that err, may have been worn, and is saturated in the smell of humans, and glamorous perfume, as it is carelessly strewn across the floor in a moment of passion.  Cinnamon, with its dry sourness, adds to this body effect whilst vanilla swoops in to ensure that the overall plushness is not compromised by too much smut.  Although, one can never have too much smut.

Boudoir is a modern perfume in a classic style, which is Westwood’s modus operandi: Elizabethan via the way of the Sex Pistols.  Like much of Vivienne Westwood’s clothing, the fragrance merges 16th century romance with something more edgy and sinful.  The whole thing is pure punk, but its a glamorous sort of punk that wears silk lingerie with her nose ring and spiky hair.  Boudoir is a daring fragrance for those that love to be noticed.  It’s a sillage monster that announces one’s arrival long before they enter a room.  Boudoir is all pearls, big hair and frilly undergarments, and it’s pretty awesome – just like our Viv.

Have you tried the legendary Vivienne Westwood Boudoir?

This is the first Vivenne Westwood fragrance I've tried and I was not disappointed. At a time when many perfumes smell the same, this was a refreshing change. When I first spray it, I immediately find myself wanting more of that opening note, it's intriuging, it's definitely unusual. You can smell the violet and roses and then it starts to smell powdery and comforting. As it settles on to my skin, I can smell toffee but not the sickeningly sweet kind of scent, but just a subtle touch of it. As the day goes on, the fragrance lasts well, and develops into a musky slightly sweet vanilla scent that kind of bonds with your own body chemistry and becomes less of a perfume and more of a 'entwined with your own skin' type of fragrance - which I love. Naughty Alice is a sweet musky smell for grown ups who still have a cheeky playful side to them. Lovely perfume, bottle and concept. Thumbs up!

This entry was posted on Wednesday, January 13th, 2016 at 11:01 am and is filed under Candy Perfume Boy, Fragrance. You can follow any responses to this entry through the RSS 2.0 feed. You can skip to the end and leave a response. Pinging is currently not allowed.