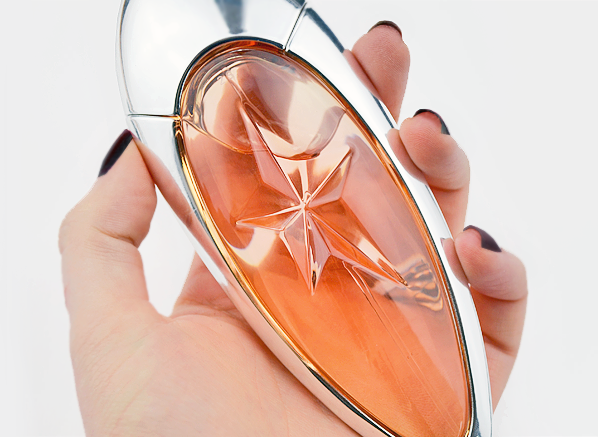 To me, MUGLER means innovation.  In fashion and fragrance, the house of MUGLER has always been at the forefront of their crafts, pushing the boundaries, creating new styles and seeking to divide opinion.  With Angel in 1992, their first foray into the world of fragrance, they birthed a new beast entirely: an oriental gourmand, the first of its kind, that smelled like an alien drag queen on steroids.  It was then, and is now, a fragrance that does not aim to please all, in fact it actively defies all ideas of what a fragrance can and should be.  Angel simply is a legend.

So 24 years on, how does MUGLER reinvent this olfactory icon for a new audience?  Well the answer is Angel Muse, a fragrance that they promise we will ‘#HateToLove’.  The idea is that Muse represents a “new dimension of the MUGLER Angel universe” acting as a sister fragrance to Angel, taking her cosmic deep into a newly discovered nebula.  Angel Muse was created by perfumer Quentin Bisch (who also created Etat Libre d’Orange’s popcorn-tastic La Fin du Monde) who injected the unusual notes of hazelnut cream-cocoa and vetiver to create an entirely different style of gourmand.  This “cosmic explosion” leads to a playful olfactory experience that is as couture as Angel, but is more in keeping with the MUGLER fashions of today than the structured shoulders and waspish waists of the ‘90s. 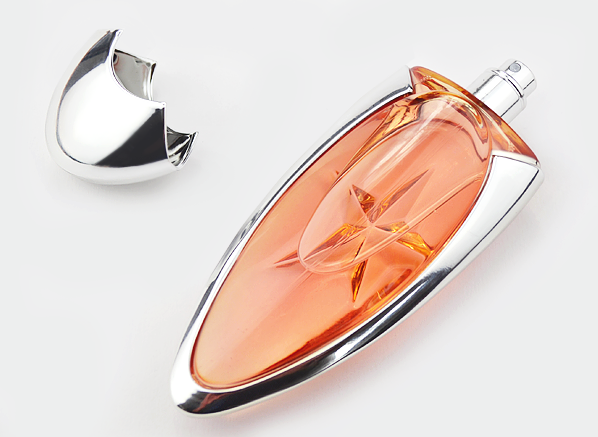 Base: Vetiver and Patchouli

Angel Muse starts out with a big blast of grapefruit, but that’s not the first thing one notices, no, the very first impression is that signature butch patchouli that is undeniably Angel (although I did do a side-by-side test, in the name of science, obviously, and they are VERY different when smelled simultaneously).  Together this big fruity note and chocolate-y Angel chromosome comes off as a bit Terry’s Chocolate Orange and it’s blooming delicious.  There’re also pink berries up top just to add an effervescent fizz and a dry contrast to the unctuous nature of the chocolate and the orange.

Where Angel was all about chocolate, caramel, candy floss, vanilla and patchouli, Muse is more sensual with an odour profile centred around hazelnut cream-cocoa, vetiver and of course, patchouli. This makes for a fragrance that is Angel-inspired but appears as something entirely different, especially in the heart which is full of nutty-delicious whipped cream with a slightly green edge.  The whole thing feels fluffy and soft, with a creamy and almost chewy texture.  When I smell Angel Muse I think of plumes of mahogany coloured silk swirling intensely in a spiral.  It certainly draws you in…

The base of vetiver and patchouli harks back to the androgynous nature of Angel by utilising two notes typically associated with masculine perfumery.  It’s a clever move because the salty and earthy nature of the vetiver links perfectly to the depth of the patchouli whilst also melting perfectly into that creamy nuttiness that makes Angel Muse such a unique beast.  In the far dry down, what’s left is a cosmic swirl of hazelnut cream-cocoa, roasted vetiver and fuzzy patchouli.  Trust me, it’s as good as it sounds.

Angel Muse is high on Angel DNA, but it’s by no means a clone.  All of the good stuff is there; the androgynous patchouli contrasted by sugar, specifically, but the whole thing feels a little bit more approachable, cosy and warm. MUGLER seeks to create fragrance addicts, releasing compositions that draw Muglerites in, getting them hooked and leaving them hopelessly dependent on the unique olfactory tones.  Angel Muse is one such fragrance and during time spent away from it, one craves that nutty warmth and the only cure is another spritz, just one more, I promise…

This entry was posted on Tuesday, May 24th, 2016 at 10:05 am and is filed under Candy Perfume Boy, Fragrance, New products. You can follow any responses to this entry through the RSS 2.0 feed. You can skip to the end and leave a response. Pinging is currently not allowed.

@escentual @whatlauraloves Thanks so much for being part of our #SunPoverty SPF Application video, Laura! ☀️❤️
2 days, 4 hours ago • reply • retweet • favourite

@escentual Where have you clipped your #SunPoverty Escentual SPF50? Show us using #HowDoYouClipIt or join the challenge on our… https://t.co/MN5GURH5ul
3 days, 3 hours ago • reply • retweet • favourite