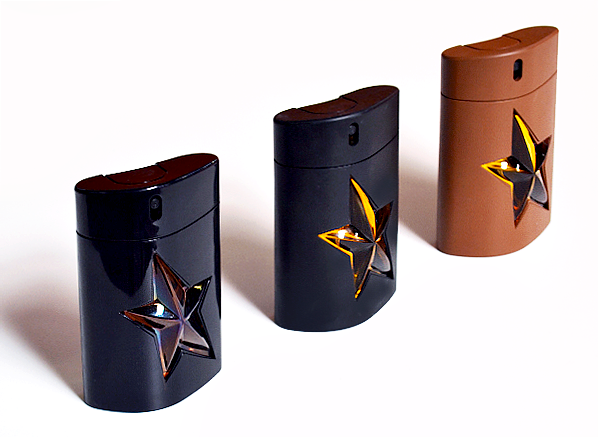 One has to wonder whether Thierry Mugler was nervous when he worked with perfumer Jacques Huclier to create A*Men (also known as Angel Men) the masculine counterpart to his legendary Angel.  It must have been a little bit daunting to piece together a scent to be just as divisive and just as striking as his signature feminine, but that’s exactly what he did.  A*Men is a futuristic Cyberbot of a scent, made with just about everything MUGLER could find in his mad laboratory, including; chocolate, patchouli, caramel, lavender, mint, vanilla, coffee, and the list goes on.  With A*Men, Thierry Mugler and Jacques Huclier birthed a brand new olfactory hero – one that went on to conquer the world.

Like superhero movies, A*Men has seen many revivals over the years and it has had its fair share of sequels, of ‘flankers’ as we call them in the perfume world.  Because the formula is so bold and complex, it allows for many unique twists and turns to be added over time and A*Men’s flankers have seen the hero boozed up, sexed up and spiced up, leading to some fascinating fragrances that all share Angel Men’s genetically modified DNA.  In this post I’ll be talking you through two of the most intriguing twists in the A*Men saga.  One is a cult classic that has possibly overtaken the original in popularity, whilst the other is the latest, and most challenging interpretation of MUGLER’s one and only masculine.  Both are fascinations for the nose. 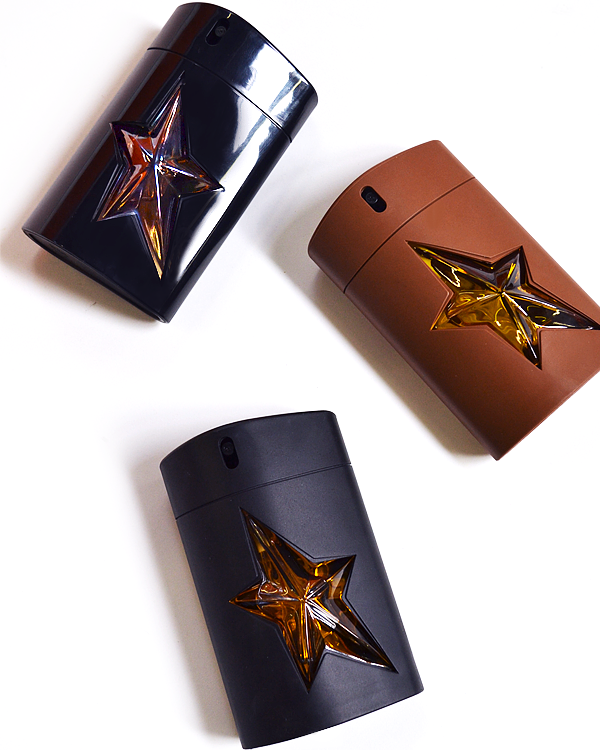 If you’ve circulated men’s fragrance websites and forums at any point in the last five years you will have seen the name of one scent shouted from the rafters: A*Men Pure Malt.  This stuff is legend and it seems like one of the very few modern masculines that every gent needs to have in their wardrobe.  But why?  What makes this stand out from the crowd and what makes Pure Malt superior to the already iconic A*Men, which in itself is pretty legendary?  Well, the answer to that question is quite complex, but it comes down to the fact that Pure Malt ‘poshens up’ A*Men’s steroid-fuelled olfactory clashes, smoothes them and adds a more luxurious twist.

A*Men Pure Malt really mixes up Angel Men’s olfactory profile, doing away with the roughness of the lavender, tar and mint, and intensifying the chocolate, patchouli and caramel notes.  To this unctuous blend it adds notes of honey and malt whisky to create a fragrance that is entirely golden.    It smells like the finest of chocolates – a rich truffle filled with salted caramel and just a touch of booze.  If it were a car it would be an E-Type Jaguar with a walnut dash.  If it was a suit, it’d be a soft tweed affair fashioned by the finest of Saville Row tailors.  That’s right people, MUGLER, the futuristic house of shock and awe went classic, and you know what?  They’ve done an excellent job!

If Pure Malt is the whisky drinking gent of sophistication, Pure Tonka is the motorcycle-riding, leather jacket wearing bad boy with an irresistibly careless attitude.  This is the fragrant equivalent of a guy that doesn’t care what people think of him.  Sure, he’s going to rub some people up the wrong way, but as they say, the very best things in life are those that divide opinion and Pure Tonka certainly knows how to do that.  He’s a complex character that isn’t easy to pin down.  Is he nice?  Is he bad?  Is he likely to make people flock to him or run away?  Who knows, but half of the fun is trying to work it all out.

Pure Tonka intensifies A*Men’s smokier aspects, playing up the vanilla and tonka bean (obv.) to create a smoky leather fragrance with a marzipan inflection.  I get visions of burned rubber, hot tar and rubble against a backdrop of melting leather and chocolate-covered woods.  It’s a real cacophony of scent delivered in a retro, ‘James Dean in A Rebel Without a Cause’ kind-of-a-way.  I think it may be too burned and too caramelised for my tastes, but I think it adds something that was missing within the A*Men galaxy: a dark star with a core that burns hotter than the sun.  Colour me intrigued – unsure but intrigued.

Which is your favourite A*Men fragrance?

This entry was posted on Friday, August 12th, 2016 at 9:47 am and is filed under Candy Perfume Boy, Fragrance, Men. You can follow any responses to this entry through the RSS 2.0 feed. You can skip to the end and leave a response. Pinging is currently not allowed.

@escentual Do you find applying SPF to your little one tricky? Try these three ways for making sure you apply SPF correctly to… https://t.co/Kw1Z1INnxA
3 hours, 46 minutes ago • reply • retweet • favourite

@escentual Looking for that #FridayFeeling? Prada Paradoxe is the perfect floral scent to carry you through whatever you have… https://t.co/ZzU00dQGmY
20 hours, 46 minutes ago • reply • retweet • favourite

@escentual If you cringe when we say: orange lines, white patches, tiger bread skin, streaks, and an orange hair line, then yo… https://t.co/pKqar5xzYg
1 day, 17 hours ago • reply • retweet • favourite

@escentual @CharlotteScan11 Hey Charlotte, So sorry for any inconvenience this has caused you. If you speak to our customer se… https://t.co/VmIKaNDuWS
2 days, 3 hours ago • reply • retweet • favourite