The Legend of Shalimar 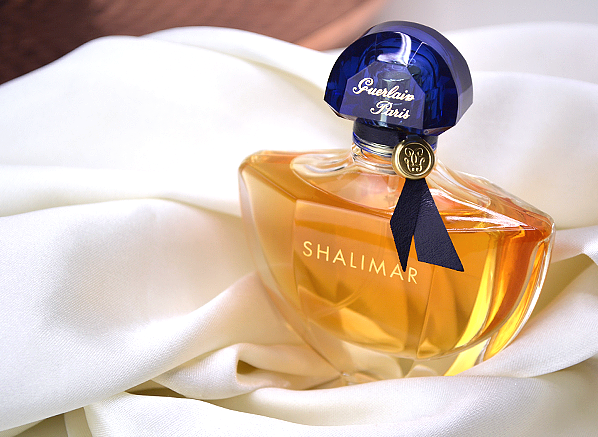 There are few fragrances out there that illicit a swoon or a sigh just by the utterance of their name, but Shalimar is one of them.  Many perfumes are beautiful and many are famous, some are even iconic but few are legends.  Shalimar is a legend – an olfactory titan that has graced the necks, wrists and décolletage of many a great woman, and has led many men astray, directly to their warm embrace.  It’s not a polite fragrance, nor is it a challenging wear, it’s just perfect in every way.
To wear Shalimar is to be enveloped.  It’s a recalibration for the senses in a world where anyone who’s anyone can launch a perfume.  Shalimar is one of the true greats and smelling it reminds one of what a truly good perfume can smell like.  It is rich in colour, texture and contrast, and it feels sensual, erotic and daring, even today.  But what makes Shalimar so great, what are its inspirations and how did it even come into being? 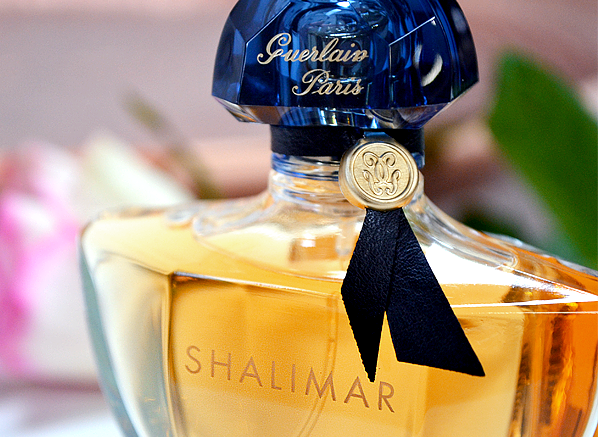 In 1925, American author F. Scott Fitzgerald published The Great Gatsby – a novel that celebrated the decadence of the jazz age.  In this same year, arguably the greatest perfumer of all time, Jacques Guerlain, the man who made Après l’Ondée, Mitsouko and L’Heure Bleue, created Shalimar which, in turn, is arguably one of the greatest fragrances of all time.  Both Fitzgerald’s novel and Guerlain’s fragrance serve as reminders of a raucous decade of parties, booze, flapper girls and jazz-fuelled hookups. Both aren’t afraid to have a good time or to court controversy, let’s put it that way.

There are many myths around the creation of Shalimar.  Some sources say that the fragrance started its life as an accident, in which perfumer Jacques Guerlain added some ethyl vanillin to a bottle of Jicky in either a moment of inspiration or madness.  Others say that the fragrance was the perfumer’s personal gift to his wife and that women in Paris could do many things from drinking to dancing, but they couldn’t wear Shalimar.  Perhaps we’ll never know the true story of what happened in 1925 that led to the creation of this Goliath of the fragrance world, but what we do know is that, in that year, Guerlain crafted a fragrance that would be their flag bearer over 90 years later. 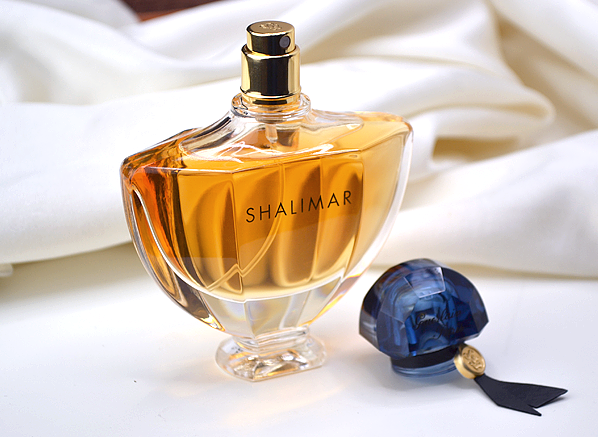 Far from the jazz clubs of Paris, Shalimar took its inspiration from exotic lands on the other side of the world.  It was named for the gardens in Lahore, Pakistan and paid tribute to a legendary tale or romance, the likes of which would put Romeo & Juliet, and Satine & Christian to shame.  The Shalimar gardens were built by Shah Jahan as a tribute to his wife, Mumtaz Mahal, for whom he also built the Taj Mahal.  In France, in 1925, the East was a place of mystery, intoxication, passion and beauty, so it’s no wonder that the fascination with this faraway world, and the tail of love, death and monument, led to the creation of a truly spectacular fragrance.

Shalimar represents romance on an epic scale.  It’s a tale of exotic love amidst opulent palaces.  The name itself is of either Arabic or Persian descent and the entire concept present a class of East meets West.  In scent, Shalimar is unctuous and powdery in a way that classical French perfumes are, but its name is distinctly picked from the East.  It’s fan-shaped bottle, originally designed by Raymond Guerlain and more recently revamped, in the Eau de Toilette and Eau de Parfum concentrations, by Jade Jagger, is inspired by an object that dates back to 2nd century Asia – paper fans that were popular in France long before the fragrance’s creation.  Shalimar is rich in history, but it’s also a worldly fragrance that takes cues from both France and India, making for a truly fascinating experience. 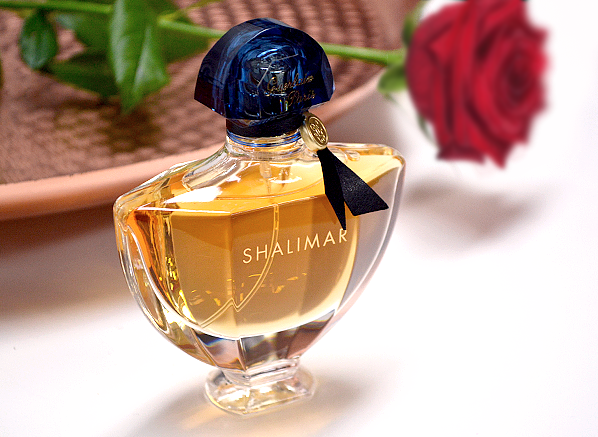 If you asked me to describe the scent of Shalimar in a pithy sound bite I’d call it ‘velvet butter’ because, to me at least, Guerlain’s flagship has the smoothest, most wonderful texture.  In terms of notes, it takes traditional materials from the realms of French perfumery, the likes of bergamot, orris, jasmine and rose, and pairs them with rich resins evocative of the East – ingredients such as vanilla, benzoin, labdanum, opoponax and leather.  The overdose of bergamot in the top gives Shalimar a golden, shimmery feel to begin in.  It’s smooth and sparkling with just a hint of powder in the background.  At first, Shalimar flourishes with a bergamot white-out, meaning that the note envelops the composition, but slowly, the bergamot draws back like a velvet curtain to reveal the more meatier notes underneath.

Guerlain is well known for their use of orris in their fragrances and Shalimar is perhaps; a) their most famous use of the note; and b) Guerlain orris at its very best.  The orris gives Shalimar a texture that is smooth and powdery, but is also ever so slightly oily and buttery.  It melts into the vanillin that brings both sweetness and smoke.  As it dries down, the whole thing swirls into a warm, resinous and animalic blend that hints at the escapades one may get up to when wearing it.  Sure, your Grandmother may have worn it, but that doesn’t mean that Shalimar is dated or ‘grannyish’ (I hate that term), instead it means that your darling G’Ma lived quite the life!  To sum up the smell of Shalimar without hyperbole or flowery description, let me just say that it smells damn good. 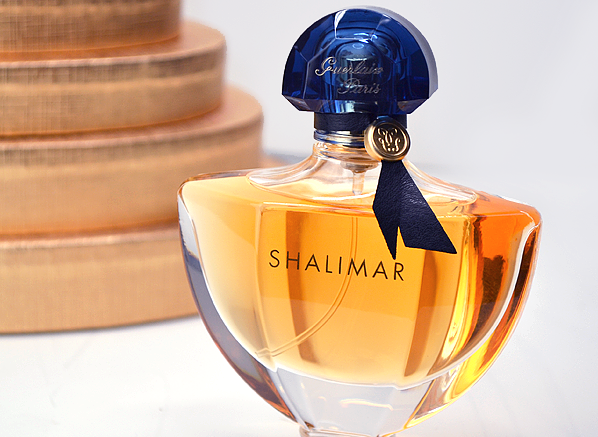 Guerlain have created hundreds of fragrances in their nearly 200 years, many of which clutter the shelves in the ‘Perfume Hall of Fame’ but Shalimar is and always has been their flagship. But why?  Well, Shalimar epitomises the Guerlain style.  It is glamorous, like opulent velvet, but also a bit naughty, like a flapper girl after one too many cocktails.  Guerlain have always been a bit crass and have not shielded away from creating delectable and devourable fragrances that smell beautiful, but also know how to have fun, and sometimes get into trouble.  There used to be a saying that out of the two perfume houses in Paris – Caron & Guerlain – Caron was for wives and Guerlain was for mistresses. Shalimar is the Queen of all of this and I say, long may she reign!

Would I recommend this perfume to a friend? No... only because I want to keep it MY secret! Shalimar is my signature scent - it's powdery, complex and sensual, and develops beautifully on the skin. I don't wear anything else as I adore it - day and evening.

This entry was posted on Monday, October 10th, 2016 at 10:53 am and is filed under Candy Perfume Boy, Fragrance. You can follow any responses to this entry through the RSS 2.0 feed. You can skip to the end and leave a response. Pinging is currently not allowed.

@escentual Try the E-S-C-E-N-T-U-A-L SPF application method so you're always safe in the sun. Here are our #SunPoverty ambassa… https://t.co/lx3zk5o6Ym
7 hours ago • reply • retweet • favourite

@escentual News just in! There's still time to enter our Instagram competition to be in with a chance of winning the Initio He… https://t.co/nbuTzL5pH0
1 day, 7 hours ago • reply • retweet • favourite

@escentual Thank you, Issey Miyake, for making the fragrance and fashion world a more beautiful place❤️ Your legacy will live on forever #isseymiyake
2 days, 9 hours ago • reply • retweet • favourite

@escentual We're prepared for a week of sunshine here at Escentual with our #summer makeup bags ready to go! ☀️ Head over to… https://t.co/7mvMCFbQRT
3 days, 2 hours ago • reply • retweet • favourite