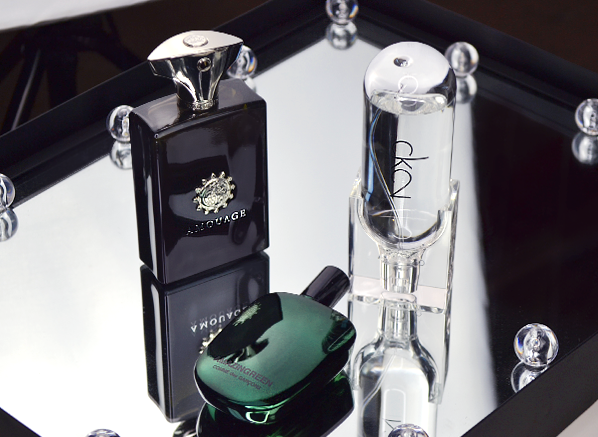 If I were to offer you a fragrance with notes of wasabi, gunpowder, popcorn and absinth, you may think I was mad or that I didn’t like you very much, which would be fair as the resulting blend of these materials may be quite pongy indeed.  Perfumes are things of roses, of woods, lemons and resins, not these weird odours that have no place in perfume.  Or are they?  The perfumer has a huge palette of materials to work with (approximately 3,000), including natural materials and nifty aroma chemicals, so this means that the possibilities really are endless and more so than ever, perfumers are creating unique, innovative and sometimes novel accords to include within their compositions.

But what do we actually mean by a note?  Are the notes we see listed with a perfume’s description the actual ingredients? More often than not the answer is no.  A list of notes can be taken as an idea of the impressions a fragrance offers in addition to some of the ingredients it contains.  For example, a fragrance that boasts a note of rose may not contain any natural rose oils but it will most likely have a rose impression that could be attributed to aroma chemicals or even a combination of natural materials.  It’s the same case if a perfume brags about having notes of, oh I don’t know, let’s say cigarettes.  This doesn’t mean that the perfumer has shoved a pack of Marlboro Lights into a blender and poured a few drops into their perfume, it means that they’ve created an accord that evokes the smell of a pack of cigarettes.  Notes lists should be taken with a pinch of salt.

But we’re not here today to talk about familiar notes of rose and musk, we’re here to talk about the olfactory underdogs that are the odd notes in perfumery – those weird and wonderful impressions that are completely unconventional.  I like odd notes in perfume because a fragrance really doesn’t have to be ‘normal’ to smell good and to be wearable.  It’s also fascinating to encounter smells of the real world in the scents that we wear.  In this piece, I’ve gathered together five perfumes that utilise scented impressions within their compositions that are frankly weird.  They may sound challenging or horrific on paper, but the truth is that they are all masterful scents that dare to be different.  After all, it’s always good to be a little bit odd, isn’t it? 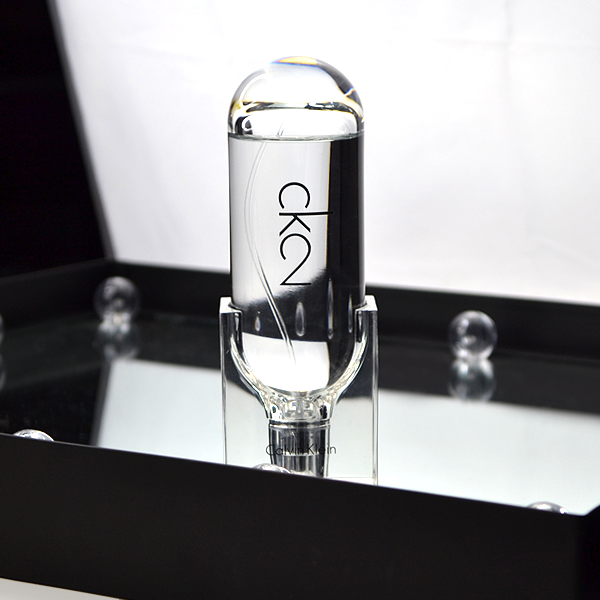 CK2 came out last year as the hotly anticipated sequel to Calvin Klein’s iconic unisex fragrance CK One, which launched during the crazy, sexy, cool 1990s.  CK One was an abstract take on citrus and CK2 takes this idea of abstraction one step further.  It simply smells like nothing else out there boasting accords of wet rock, orris and mandarin, but smelling like none of these things as a complete entity.  The odd note here is wasabi (Japanese horseradish), which lets face it, we’re more likely to encounter in a sushi bar than in a fragrance, but CK2 is no ordinary fragrance after all.  CK2’s wasabi note isn’t as bold, green and mouth-burning as the real thing (see Olfactive Studio’s Panorama for full-on wasabi weirdness) but it does add an unusual sense of greenery – one that isn’t leafy or jungle-like but is instead crisp and milky.  CK2 really is fascinating and its odd note of wasabi only adds to its unique portfolio of olfactory surprises. 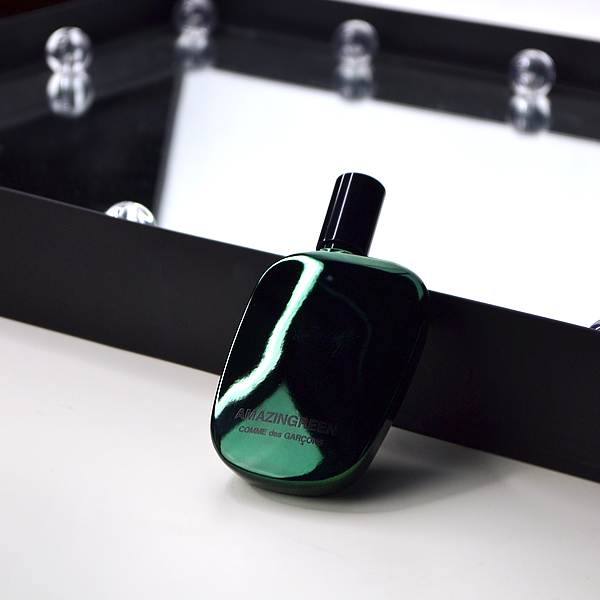 Comme des Garçons have always been innovators in fashion and fragrance.  Their collection of scents offers up unusual and intriguing takes on woody notes, incense and resins, often in a minimalistic manner.  For this reason, Amazingreen stands out as something that is not in keeping with the style of the brand.  As expected, Amazingreen is green, but it evoke the idea of sweet green leaves covered in dew more than it does a lush rainforest or damp moss.  Underpinning this delicate sweetness is an odd note of gunpowder that adds a grey, grainy and mineral quality which helps to add a harshness that acts as a stark contrast to the green in Amazingreen.  This odd note may not be as dangerous or as dark as real gunpowder but it definitely has a murky moodiness to it that may just be the ‘amazing’ in Amazingreen. 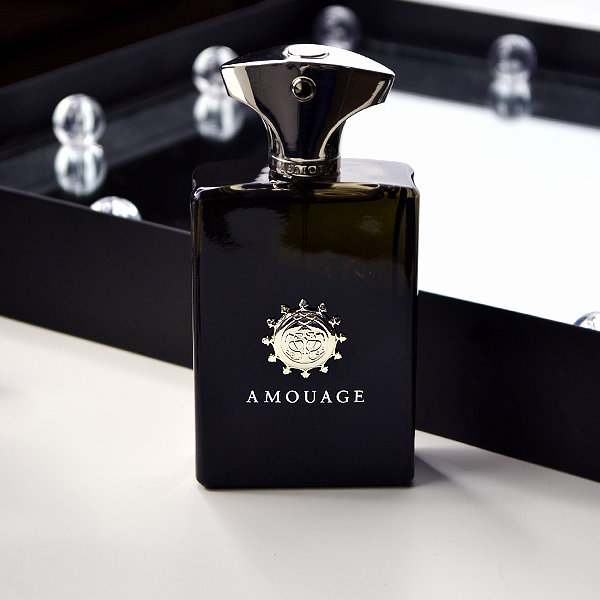 It would have been frankly rude not to include a boozy odd note somewhere in this piece, but what constitutes an unusual alcohol note?  We see whisky, champagne and wine notes (or impressions) quite often in scent, but it’s rare that we see something as dark and dangerous as absinth, or as she likes to be called ‘The Green Fairy’.  Amouage’s Memoir Man displays the most perfect use of absinth ever.  It has a wonderfully cool air, thanks to its moody mint opening, which feels refreshing and fuzzy.  The absinth lies in wait behind this mint curtain, with its icy bite ready to ensnare and influence the wearer in a deadly way.  You may feel as if you need to approach Memoir Man with caution but my advice is to spritz it on a simply enjoy the ride – The Green Fairy knows how to have fun, fear ye not. 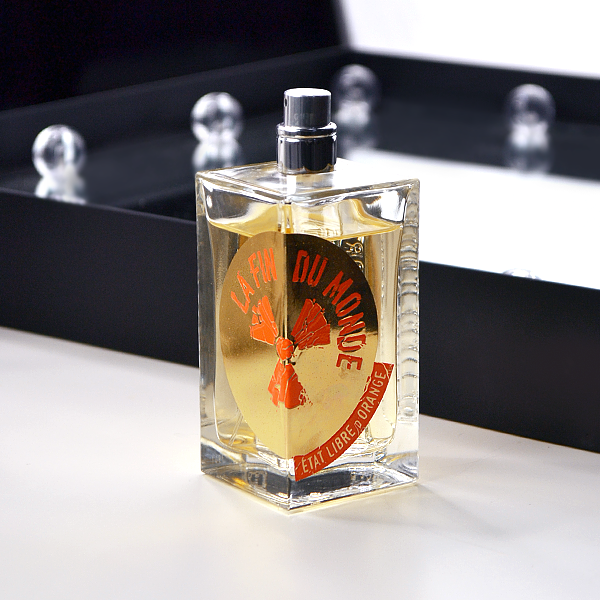 OK, let’s go out with a bang.  After all, if the world’s going to end, we might as well smell good, right?!  Etat Libre d’Orange are masters of the odd note so I really did have a lot to pick from when selecting something from their collection.  I could have gone for the, erm, post-watershed bodily fluid notes of Sécrétions Magnifique or even the Thai food inspirations of Fils de Dieu, but it is the popcorn of La Fin du Monde (The End of the World) that really intrigue me.  This scent pairs the caramel tones of buttered popcorn (and yes it really does smell like popcorn) with the odour of hot rubble to create the impression of a catastrophic explosion witnessed on screen.  The whole thing is really odd and it most certainly challenges one’s perceptions of what a scent can be, but it’s just so much it can be forgiven for it’s more challenging aspects.  That’s a pretty good place to end on, don’t you think?

What are your favourite odd notes in your scents? Let me know in the box below!

Did you like Hugo Boss Black? Fancy that cool demeanour that exudes from you as you walk by people or when go out in the evening? Then Commes Des garcon Amazing Green might be right for you. Has that fresh yet sharp masculine blend scented with some flowery undertone. When allowed to stay/dry on, the result is simply refreshing. In my opinion, this cologne gives the impression of a confident, attractive and stylish man. Being someone that wears this cologne, I wouldn't say I am all of these aforementioned; however, it's a cologne one feels comfortable wearing all day. cheers

This entry was posted on Thursday, January 5th, 2017 at 11:23 am and is filed under Candy Perfume Boy, Fragrance, Tried & Tested. You can follow any responses to this entry through the RSS 2.0 feed. You can skip to the end and leave a response. Pinging is currently not allowed.

@escentual Retinol eye creams are taking the world by storm! But what do they do and which one is best for you? Find out in ou… https://t.co/ueqai03OsR
1 day, 10 hours ago • reply • retweet • favourite

@escentual @jo_reviews @RoyalMail Thanks for this - our operations team will be thrilled to hear your feedback! ☺️
2 days, 13 hours ago • reply • retweet • favourite

@escentual You’ll be buzzed when you hear all the skincare benefits of using honey skincare 🐝 This selection of delicious hone… https://t.co/bl64RKZGsB
3 days, 16 hours ago • reply • retweet • favourite