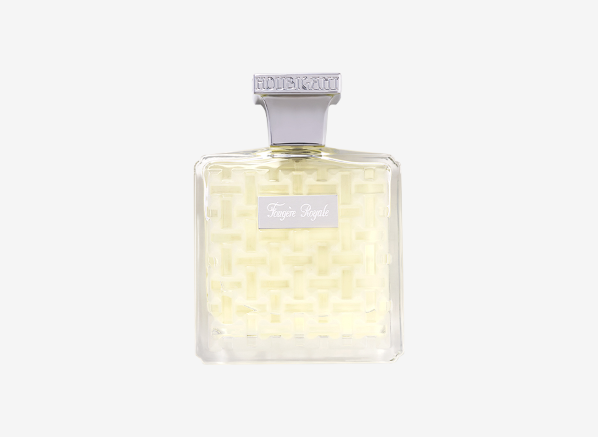 A showstopper in the fragrance world, Houbigant Fougere Royale Eau de Parfum is an entrancing combination of green notes, full of twists and turns like an adventure through lavish countryside. Originally, Fougere Royale was created in 1882 as an ode to pastoral beauty, claiming the triumphant title of being the first ever fougere (fern-like) fragrance ever created. Now, its green fern essence has been reimagined to be re-released as a perfect balance of aromatic, floral and woody notes.

Instantly, the flavours of the earth shimmer out of the scent, the top notes of sparkling citrus bergamot, aromatic Mediterranean herbs, calming lavender and chamomile coming together to emit an uplifting fresh quality that is echoed throughout the rest of the scent. Like an elegant garden blooming with flowers, the fragrance heart features geranium and rose de mai. The floral heart sings alongside the rich spice of pepper and cinnamon, completed by the floral-spicy scent of rondeletia. There is a bouquet of green grasses and a moment where the scent of freshly cut hay gives a natural, pastoral feel. Then, the woody base enhances the initial earthy tones as the likes of oakmoss, patchouli and clary sage are revealed. The final notes in the base are amber, coumarin and tonka bean, adding a thrilling layer of warmth and cosiness that elevates the natural greenery by adding a subtle sweetness.

Inspired by raw materials of the highest quality, Fougere Royale Eau de Parfum sings the praises of the original perfume first released in 1882. The updated version is as special as its revolutionary predecessor, continuing the fougere fragrance family with its modern and refined elegance.

If you want to own a fragrance full of perfume heritage, bursting with green freshness and clever spices, you’ll love the imaginative scent of Houbigant Fougere Royale. Nature lovers will be enthralled by its natural green elements, which are paired beautifully with complex notes to set niche fragrance lovers’ hearts alight.

Houbigant Fougere Royale Eau de Parfum feels like reaching the pinnacle of a racing adventure, when you pause for a moment to appreciate nature, feeling the pulse and heat of the earth beneath your feet.

Though originally designed to be worn by men, we believe any fragrance can be enjoyed by anyone – regardless of gender. The earthy tones of Fougere Royale typically appeal to men but its surprising freshness and floral heart gives it universal appeal.

A long-lasting Eau de Parfum, Fougere Royale warms on the skin throughout the day as its earthiness becomes more prominent. The intoxicating scent can be reinvigorated with an additional spritz before stepping into the night after hours of day-time wear.

The heavy glass flacon is classic in shape, embossed with a woven design that is the height of sophistication, adding the perfect hit of glamour to the simplicity. The original bottle designed by Lalique has influenced the timeless attraction of the design.

The fragrance juice has no artificial colouring added, composed of an incredibly high percentage (80%) of natural ingredients.

7 Things You Need to Know About Houbigant

This entry was posted on Monday, July 11th, 2022 at 3:20 pm and is filed under Fragrance Review. You can follow any responses to this entry through the RSS 2.0 feed. You can skip to the end and leave a response. Pinging is currently not allowed.

@escentual @whatlauraloves Thanks so much for being part of our #SunPoverty SPF Application video, Laura! ☀️❤️
1 day, 19 hours ago • reply • retweet • favourite

@escentual Where have you clipped your #SunPoverty Escentual SPF50? Show us using #HowDoYouClipIt or join the challenge on our… https://t.co/MN5GURH5ul
2 days, 18 hours ago • reply • retweet • favourite