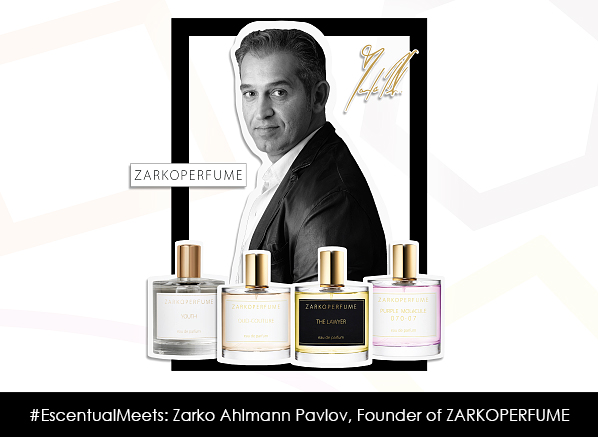 Are you career-focused, driven and looking to be inspired? #EscentualMeets is your source of motivation. Every month, we reveal the grit, success and stories of a selection of the world’s leading beauty founders…

Zarko Ahlmann Pavlov is the founder of the Danish perfume brand ZARKOPERFUME. The niche luxury fragrance house has a unique approach to scent, and, unsurprisingly, Zarko’s journey to launching the brand is anything but traditional. Here’s Zarko’s story…

1. Where It All Began
2. Launching ZARKOPERFUME
3. The Future
4. Business Advice

1. Where It All Began

Zarko’s family immigrated to Denmark for his father’s work when he was six months old, and Zarko still lives in the city where he grew up. “It was the perfect place to be raised. It’s a small community where everybody knows each other. So, whenever you walk the streets, people will say hello. The smell of vanilla reminds me of my childhood. My mother always used it, so I feel safe whenever I smell it”.

Education was more about socialising for Zarko than learning. “I went to school for my buddies because I love them and still have them. When I left school at 16, I had no idea what I wanted to do, so I became a waiter. It was around then that I fell in love with my now-wife. But I had to go to France to learn about cognac and wine production. I was there for 6-8 months, and all I could do was think about this girl”.

Despite not being a straight-A student, Zarko was driven to succeed. “I had this enormous drive and power to create something with my life”. Zarko went on to work with high-end designer clothing brands and opened two retail stores and online stores.

After working in fashion retail for ten years, Zarko created his own brand. He had always been passionate about perfume and wanted to create his own, but it was challenging. “The perfume industry is secretive. It wasn’t easy to begin or get help; I had to educate myself, and it took me five years to create my first fragrance”. That scent was Molecule 234.38, which he sold in his fashion store before the brand took off. “We sold one or two, and then it became huge. And then we sold 25 per day. Sometimes, 30, and I thought ok, this could be my way out and maybe would make me a perfumer”. At this point, Zarko decided to close his store with 24 hours’ notice and “follow his heart and biggest dream”.

The Inspiration for the ZARKOPERFUME brand was Zarko’s desire to create perfumes that capture the climate of Scandinavia. And as a proud Welsh woman, I resonate with his love for his country. “I wanted to create something other than classic perfumes with top, middle and base notes. I wanted to do something else. For me, I wanted them to imitate Danish culture. My vision is to create fragrances encapsulating Scandinavia, and my approach is to fuse classic French perfumery with stringent, Nordic molecular science”. To this day, Zarko is Denmark’s only practising perfumer, and his scents are wholly unique. Unlike other fragrances, ZARKOPERFUME formulations don’t have traditional note structures. Instead, the perfumes are based on molecular structures. Zarko’s tagline is, “Perfume is nothing without human skin”, and each aroma reacts to your body to create an entirely personal smell.

Creating and selling perfumes in Denmark wasn’t easy to start. “In Denmark, we do furniture, cheese, and green energy. It was a big challenge to bring distributors on board for perfume”. Luckily, Zarko’s passion and the incredible aromas got people on board. Today, the business has grown beyond what Zarko dreamed, and the company culture is very important to him. “I’m not a usual founder. We don’t have titles in our company. I never use the power of being CEO, I will always be behind my workers instead of in front, and we solve problems much quicker that way”. Zarko spends most of his time creating fragrances, “I have a small notebook where I sometimes write down my ideas. I’m inspired by everything around me, nature, people, and personalities. When I have the final creation, I will smell it for 6-8 months and tweak it over time. I don’t give it to a panel to smell; I rely on my own thoughts”.

When I asked Zarko what he thought made his creations special, he said, “Less is more. We use fewer ingredients, allergens and so on and source the highest quality ingredients. Our perfumes are not invasive; you wear them, and they don’t wear you. When I create something, it needs to be magic”.

4. The Future of ZARKOPERFUME & Fragrance

Zarko has a very pragmatic approach to the future of his brand, “We don’t know what the future looks like. I have two fragrances I’m working on now. We take one day at a time and never rush perfume creation”. On the future of the perfume industry, Zarko hopes for more strides in sustainability, “I think the future is for us all to save the planet for our children. We don’t write on our website that we’re completely green, but we try our best. I think the biggest change is considering how much water we use in our factory”.

His advice for anyone looking to follow in his career footsteps is simple, “First of all, you need to believe. Educate yourself, read, attend online classes. Be true to yourself; whatever your idea is, try to stay with it”.

This entry was posted on Friday, October 14th, 2022 at 1:00 pm and is filed under #EscentualMeets, Escentual. You can follow any responses to this entry through the RSS 2.0 feed. You can skip to the end and leave a response. Pinging is currently not allowed.

@escentual RT @bareMineralsUK: @cb478cb Hi CB, due to global supply chain shortages some items may be temporarily out of stock on our website. Luckily…
16 hours, 12 minutes ago • reply • retweet • favourite

@escentual Obsessed with #newbeauty? Catch up on our Instagram LIVE to hear the latest launches and upcoming #offers... LIVE… https://t.co/uy3cj1aBGV
1 day, 18 hours ago • reply • retweet • favourite