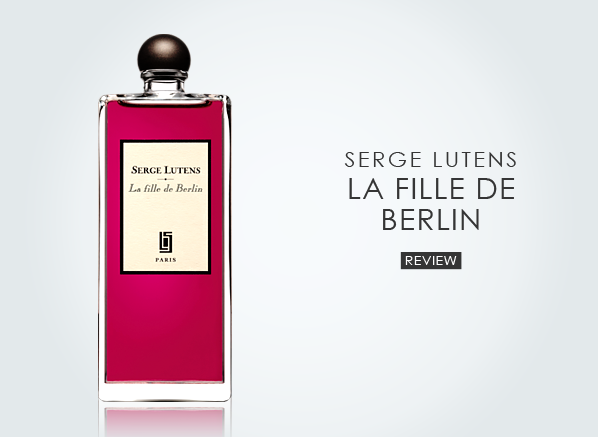 Serge Lutens, the brain behind the brand of the same name, is a man shrouded in mystery. Often viewed by perfume nerds as their eccentric yet beloved uncle, M. Lutens is a creative force to be reckoned with and throughout his career has revolutionised the worlds of venerable fashion and beauty institutions such as Dior and Shiseido as well as creating iconic perfumes for his very own line.

The latest edition to Lutens’ export collection is La Fille de Berlin (The Girl from Berlin) and is inspired by Berlin during the Golden Twenties and specifically the German-American actress and early purveyor of androgyny – Marlene Dietrich. Creating a perfume inspired by such a formidable muse is no mean feat and the challenge is indicative of Lutens’ thirst for pushing the boundaries of perfume as a personal art.

To evoke the complex character that is Dietrich, Lutens’ and perfumer Christoper Sheldrake have penned a composition that centres on the noble rose. Rose notes in perfumes are by their very nature complex, the flower itself wears many guises and slots in to almost all perfume genres – oriental, floral, masculine and woody to name a few and Serge himself already has two roses within his stable (Sa Majesté La Rose and Rose de Nuit). It would be safe to say that La Fille de Berlin makes a worthy addition to both the world of rose and the house of Lutens.

With the first spritz La Fille de Berlin is rose, rose and more rose – it’s at this point that one understands why the juice is tinted a striking shade of ruby red. The roses here are full and lush, awash with sourness, accented by tart fruits and underpinned by spice and earth. The minty, herbal aroma of geranium presents a pungency that extends the richness of the rose.

As one would expect from a perfume inspired by the gender-bending queen of cinema La Fille de Berlin has a hard edge to it, a sharpness of tone that hints at the thorns that protect the flower, but on the whole the perfume is remarkably soft in texture, giving off a silky vibe for the majority of its lifespan. This contrast of textures creates an interesting fight between the hard and the soft that allows La Fille de Berlin to find a unique place amongst the plethora of roses in Uncle Serge’s garden.

Ultimately, La Fille de Berlin is an ode to the glamour puss – to the woman or man that displays a hard, impenetrable exterior of designer fabrics, perfume and jewellery to mask and protect a soft, tormented core. It seems clichéd to call a rose fragrance ‘beautiful’ but in the case of La Fille de Berlin ‘beautiful’ is both an apt and worthy descriptor for a perfume that captures the essence of one of cinema’s truly great performers.

La Fille de Berlin opens with a burst of old fashion velvet rose. Then a touch of raspberry, the spice is light just giving a little warmth. Powdery but not overly so, just a pinch. I will say this is feminine, and nothing like the Sa Majestic Rose which is quite green.

This entry was posted on Monday, March 25th, 2013 at 9:54 am and is filed under Candy Perfume Boy, Fragrance, Guest bloggers, Spotlight On, Tried & Tested. You can follow any responses to this entry through the RSS 2.0 feed. You can skip to the end and leave a response. Pinging is currently not allowed.

@escentual “I always get excited by brands or skincare formulations for men as I want to see greater inclusivity within the be… https://t.co/O6uewn9mq0
4 hours, 56 minutes ago • reply • retweet • favourite

@escentual Thanks so much for your feedback Lauren, so glad that you are happy with your experience shopping with us!😊 https://t.co/MemaedaKno
8 hours, 55 minutes ago • reply • retweet • favourite

@escentual @2015Twt We're sorry to hear that you're disappointed with your shopping experience with us. Please DM us so that w… https://t.co/eAh2D6moXM
1 day, 6 hours ago • reply • retweet • favourite