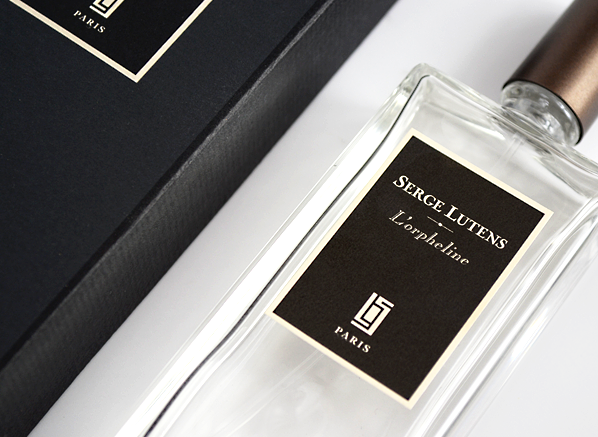 To walk hand-in-hand with Serge Lutens on his fragrant adventures is to expect the unexpected.  He is the man that has brought, amongst other things, pure androgyny (Féminité du Bois), fatal flowers (Tubéreuse Criminelle, Sarassins and Iris Silver Mist) and oriental opulence (Ambre Sultan) to the world of perfume, and it would be fair to say that he courts the unconventional and actively defies the perfume industry’s rules.  To put it simply, Serge Lutens is an olfactory renegade that speaks in riddles and presents perfumes in an entirely unique light.

His latest perfume, L’Orpheline (The Orphan), is as unconventional as they come, and not just because of its more than slightly left of center name.  Like many of the fragrances created by Lutens and his perfumer counterpart, Christopher Sheldrake, L’Orpheline treads a fine line between the masculine and the feminine – a thin tightrope walk between the rough and the smooth, creating an olfactory experience that is a bemusing as it is amusing.

Serge Lutens L’Orpheline opens with a short blast of cool mint, before seamlessly seguing into lavender, its close herbal cousin.  Now when I say lavender, I don’t mean a great big slug of the stuff, conjuring up the image of purple rinses and doilies, I refer instead, to a softly purring type of lavender that exudes little sweetness and excellently portrays the flower’s drier and more mentholated facets.  There’s a clarity to the top notes that isn’t fresh or zesty, but instead feels cool, like cold water lying still in a pool on the ground.

This cool and lavender-centric opening blurs quickly into a combination of wood and incense, that isn’t entirely unfamiliar.  The difference here however, is the plumes of grey powder that underpin the woods, shrouding their sharp edges and intensifying their plushness.  It’s an odd dichotomy between the astringent and the fluffy that leads each part to almost cancel the other out and make for an unusual middle ground that becomes more and more intriguing as it develops.

As it softens further into the base, L’Orpheline’s woody facets strengthen and eventually outweigh the doughy qualities found in the heart.  A smokiness also emerges late into the development, conjuring silvery strands of salty fog up into the air, blending it with the soft, fiery crackle of pepper and spices, creating a warm, ember-y glow that really is as delightful as it sounds.

L’Orpheline is a tricky perfume to pin down and it takes a long time to reveal its secrets.  Smelling it, one wonders whether it is floral or woody, masculine or feminine, moody or calm.  It’s a perfume of contrasts and juxtapositions, presented in an intelligent and palatable fuzziness that feels neither particularly smooth nor jagged.  This intriguing blend in an essay in the familiar and the unchartered, that may or may not set your heart on fire.  What is guaranteed though, is that smelling L’Orpheline will leave you suitably perplexed and I have an inkling that’s just the kind of reaction that Uncle Serge wants, and more than possibly gets a little bit of a kick out of.

A really sophisticated fragrance - at first I was a little unsure, but then as it warms on the skin it just smells lovley, warm an spicy - a fragrance for all seasons.

This entry was posted on Wednesday, August 6th, 2014 at 10:58 am and is filed under Candy Perfume Boy, Fragrance, Guest bloggers, New products. You can follow any responses to this entry through the RSS 2.0 feed. You can skip to the end and leave a response. Pinging is currently not allowed.