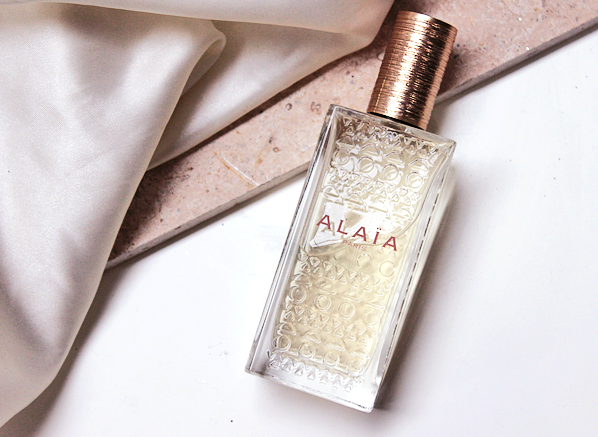 Azzedine Alaïa is an enigma of the fashion world.  He doesn’t show his clothes at fashion week, place adverts in magazines or on billboard, or anywhere for that matter, and he doesn’t use celebrities as human clothes hangers.  He’s an anti-establishment designer that sells phenomenally well, mainly due to the incredible craftsmanship that goes into each and every one of his garments.  The mystery and the detail that is the key to Alaïa’s success has certainly not escaped his fragrant exploits and with his debut perfume, the fascinating ALAIA Paris, the designer created liquid fashion by bottling the very aesthetic that has made his fashion so popular for so long.

Alaïa’s approach to perfume is collaborative and with his latest scent, ALAIA Paris Blanche, he has once again teamed up with top Firmenich perfumer Marie Salamagne to create a fragrance inspired by a visit to the Alhambra of Grenada.  As the name suggests, the overarching theme in the fragrance is the colour white, specifically in light, in architecture and in cotton shirts, translated into scent by notes that are not blinding, bright or dazzling and instead offer a soft, muted and warm take on white.  The scent is as fascinating as it sounds and it is the next instalment in an ongoing olfactory odyssey that is already proving to be strange and beautiful in every way. 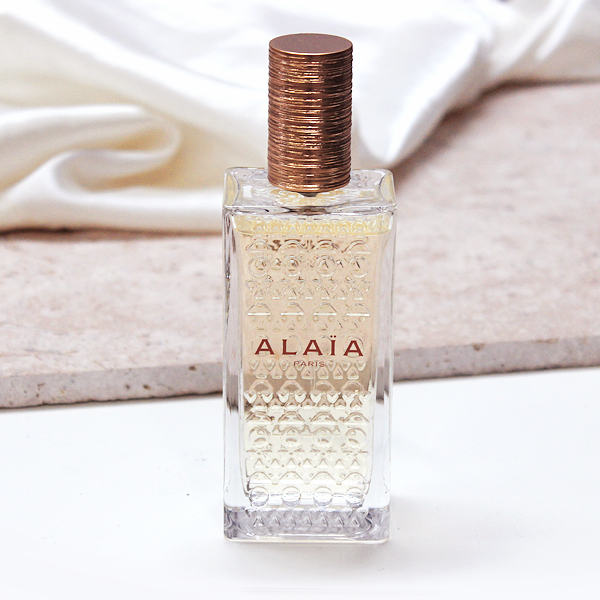 The first spritz of ALAIA Paris Blanche is filled with intrigue.  It opens cool with a hint of the icy floral/incense accord found within the original fragrance, but this whiff of recognition is fleeting and as one sniffs closer an entirely new character is unveiled, one that is as soft and warm as a scent can be.  The top notes are lush and creamy with the lactonic sweetness of almond milk, which has an ever-so-subtle hint of green freshness underneath that adds a lively zing to the mix.  The initial impression is very much of a silky, milky melange that has a smooth texture and a warm heart.

In time, ALAIA Paris Blanche plumps itself up to reveal a powdery plushness that is voluptuous and thickly textured.  To me, there appears to be a clash of two key elements in the heart; the grainy makeup powder of iris and the cherry, marzipan tones of heliotrope.  Together, these two materials give the fragrance a dash of pigment, turning the white of the milky texture into a shade of nude, with the grey of the iris and the violet of the heliotrope swirling together to create the perfect colour. In shade, texture and cut, ALAIA Paris Blanche feels like the perfect fragrant garment.

What I really love about ALAIA Paris Blanche is the fact that it takes what could be a relatively standard, albeit rather beautiful, powder fragrance and adds a touch of the unusual and a dash of the dangerous with something animalic in the base.  This animal note is a strange and slightly-sour muskiness that evokes the idea of warm skin.  It really is just the tiniest hint but it provides a splash of something slightly unsettling that melts slowly into the vanilla cushion that holds strong at the final stage of ALAIA Paris Blanche’s development. It’s this touch of the dark within the beautiful that makes the fragrance something more than just a designer fragrance – it turns it into a wearable art form, just like a piece of Alaïa’s couture.

The original ALAIA Paris alludes to the dark and mysterious aspects of Alaïa’s aesthetic, with its black bottle and scent that bloomed enigmatically with ice cold flowers on stalks of woven incense.  It’s an aloof perfume that beguiles just as much as it warns one to keep away. ALAIA Paris Blanche is the complete inverse of this.  It is a warm embrace, a familiar face – comfort in olfactory form that is inviting, cosy and beautifully blushing.  There is a tenderness to this fragrance but also a strangeness too and wearing it is akin to throwing on a silk shawl painted in an intriguing pattern. Powdery, warm and intimate, ALAIA Paris Blanche is a contrast from the crystalline clarity of its flacon, but Azzedine Alaïa is a man of contrasts and there is a beautiful parallel of this trait within this perfume.

Reacquaint yourself with the structural beauty of the original ALAIA Paris Eau de Parfum in my review here.

This entry was posted on Thursday, February 2nd, 2017 at 12:59 pm and is filed under Candy Perfume Boy, Fragrance, New products, Tried & Tested. You can follow any responses to this entry through the RSS 2.0 feed. You can skip to the end and leave a response. Pinging is currently not allowed.

@escentual Try the E-S-C-E-N-T-U-A-L SPF application method so you're always safe in the sun. Here are our #SunPoverty ambassa… https://t.co/lx3zk5o6Ym
1 day, 7 minutes ago • reply • retweet • favourite

@escentual News just in! There's still time to enter our Instagram competition to be in with a chance of winning the Initio He… https://t.co/nbuTzL5pH0
2 days, 8 minutes ago • reply • retweet • favourite

@escentual Thank you, Issey Miyake, for making the fragrance and fashion world a more beautiful place❤️ Your legacy will live on forever #isseymiyake
3 days, 3 hours ago • reply • retweet • favourite

@escentual We're prepared for a week of sunshine here at Escentual with our #summer makeup bags ready to go! ☀️ Head over to… https://t.co/7mvMCFbQRT
3 days, 19 hours ago • reply • retweet • favourite