Y is for YSL Fragrances 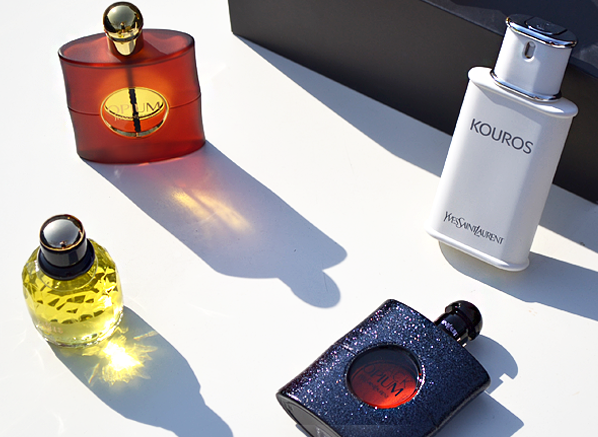 “Thomas, AKA The Candy Perfume Boy, takes you on a journey around the fragrance world with ‘The Escentual A-Z of Fragrance’ a fun and fragrant ride that gives you all you need to know – the notes, the brands and the perfumers – to become a true fragrance addict/nerd”.

Whether you know them as Yves Saint Laurent, YSL, or Saint Laurent Paris, it’s impossible to deny the importance of the house of Y, not only in the realm of fashion but in the world of perfume too.  YSL have created more than their fair share of classics and looking at their lineup of scents is like taking a peek into the perfume hall of fame.  This brand is well known for pushing the limits of olfaction – for creating fragrances that aren’t afraid to be dangerous, to be provocative and beautiful.  The YSL fragrances are a different breed.  They speak of power in femininity and softness in masculinity, subverting expectations and presenting something that is always irresistibly and undeniably French.

In this piece I want to celebrate the very best of what YSL has to offer, looking at the three different ages of the house, which span the time when Yves Saint Laurent himself was at the helm to today, where the fragrances come from a more commercial standpoint.  At every age, YSL has proved to be a bold house, making fragrances that captures the spirit and beauty of their couture.  It’s a house that we’ve all experienced, whether we’ve worn a YSL scent or loved someone who does.  YSL is one of the greatest fragrance houses out there and for that reason, the ‘Y’ – the penultimate instalment in Escentual A-Z of Fragrance could only stand for Yves Saint Laurent. 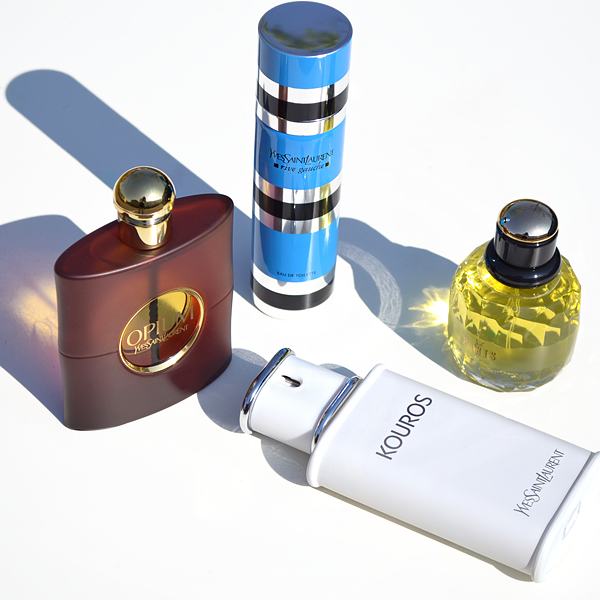 Paris
Let’s start with Paris because what other fragrance on this planet more perfectly matches its name than this one?  To me, sniffing Paris is like walking along the banks of the Seine (in YSL ready to wear, of course) in the city of lights.  Everything appears in pastel shades, the pale pink roses, violet skies and mimosa yellow of the sunlight.  This is a fragrance with vaseline on the lense, bright rosy colours (the jammy rose note in this is as colossal as the Eiffel Tower) muted by a filter of sandalwood.  It’s one of the true classics and sniffing it is as essential as a trip to Paris.  Just prepare to fall in love.

Rive Gauche
I’d be hard-pressed to pick my favourite YSL scent, but if I had to, and I’m talking about a gun to the head situation here, Rive Gauche would take the title.  This stuff is like sprayable silver and it’s heartbreakingly beautiful, even now.  Launched in 1971, Rive Gauche epitomises the cut and glamour of Yves Saint Laurent’s designs, pairing sharp, bubbling aldehydes (which shimmer like hair spray) over metallic roses and hard-edged greenery.  Surprisingly this all comes together to create something remarkably soft and comforting without being demure or shy.  Rive Gauche is the scent of confidence, but not arrogance.  It’s a self-assured floral that knows that it looks good and rightly so!

Kouros
Let’s talk men for a second and when it comes to masculine perfumery, is there anything more unashamedly manly than Kouros?  I think not!  Kouros is a tanned adonis who struts around on the beach completely naked because he’s so in love with his own physique.  He’s a fuzzy chested scent that presents a remarkable juxtaposition between the sterile and the absolutely filthy.  On the first sniff, Kouros smells like a bright white room cleaned with orange blossom water, but slowly his naughtier side shows with civet and spice creating a real animalic funk that is sweaty, masculine and more than a little bit sexy.  On hot days there is nothing better than this, especially if you want to channel a bit of Schwarzaneger-chic.

Opium
Where to start with Opium?  I could just say that Opium is one of the most famous fragrances in the world and leave it there, but that would be a bit lazy of me, wouldn’t it?  Opium epitomises the excess of the time in which it was launched.  It’s a fragrance that says I dare to be the biggest, baddest and boldest scent out there and boy does it succeed.  Opium is a cluster bomb of spice, white flowers, resins and woods.  It’s a fragrance on fire and it can be smelled from a mile away.  Boasting a dangerous and controversial name, Opium lived up to its hype and was responsible for taking the oriental genre into an entirely different direction, spawning hundreds of smell-a-likes.  How’s that for an icon? 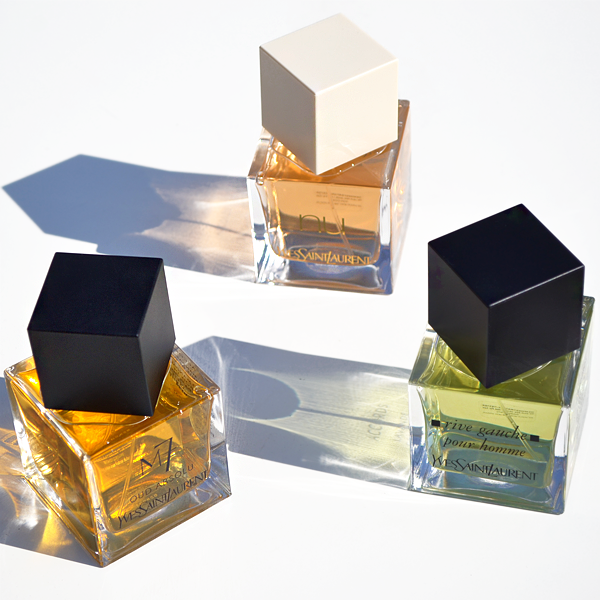 In 1999, when Gucci acquired the house of Yves Saint Laurent, Tom Ford was named the Creative Director of the label.  Now, if there’s one thing Mr Ford knows about, it’s fragrance and under his leadership, YSL launched a host of fragrances that can only be described as cult classics.  Tom Ford took his provocative approach, his love of classical glamour and his unavoidable penchant for anything handsome and created three of the very best fragrances to have graced the mainstream this millennium.

M7 Oud Absolu
Perhaps the most famous of these compositions is M7 Oud Absolu (originally launched simply as ‘M7’ due to it being the seventh masculine from the brand) which was reported, the first mainstream fragrance to boast an oud accord.  In typical Tom Ford-style, the fragrance was advertised with a fully nude model, which caused quite the controversy but let’s not allow that to overshadow the fact that M7 is a terrific fragrance.  It smells like medicinal woods and fluffy cashmere, with a hint of masculine bodies.  Sounds sexy, doesn’t it?  It is!

Rive Gauche Pour Homme
It’s impossible to talk about YSL or Tom Ford and not mention Rive Gauche Pour Homme, which I fully believe is the greatest masculine fragrance to have ever been made.  How’s that for an endorsement?  What makes the masculine counterpart to Rive Gauche so great is the fact that it takes a familiar and somewhat dated style (the classic fougère) and modernises it.  The result is a handsome barbershop fougère with the rugged designer stubble of a gloriously rich patchouli note.  It is heaven on Earth. 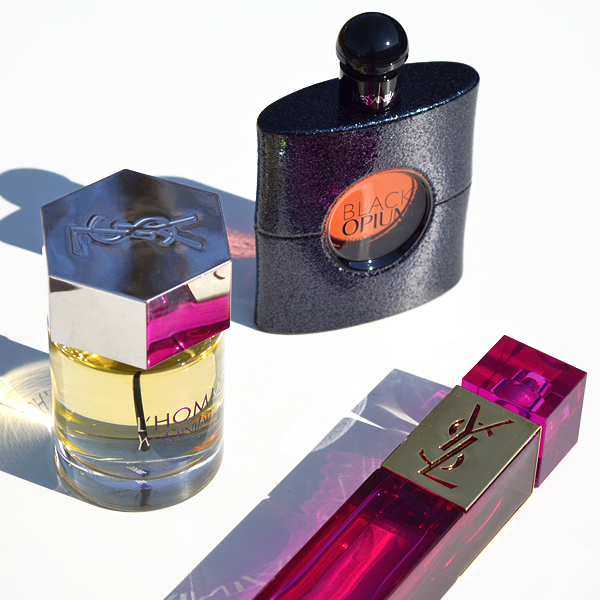 YSL’s current line up of scents is what I would call bang on trend.  They’ve moved from being innovators of fragrant fashions to perfectionists who take what’s popular and fine tune it to suit the bold and liberated aesthetic of YSL.  These are the YSL scents for today – they’re more approachable than the bastions of the past, but they still hold strong to the bravery that is essential when carrying those historic three letters – Y, S and L.

Elle
Despite being part of YSL’s new guard, I feel as if Elle was made in the true spirit of the classics of the brand.  Elle is a vampish rose and patchouli that brings to mind the image of a woman in a dark black suit with vivid pink-glossed lips.  It’s a fragrance on contrasts, almost as if it takes the super feminine roses of Paris and pairs them with something finely tailored, in the style of Rive Gauche.  Elle may not be the YSL fragrance that is most commonly spoken about, but it’s one of YSL’s best-kept secrets.  Try it if you ever want to feel a little bit vampish.

L’Homme
Sometimes the masculine fragrances within the YSL stable get overlooked and I can see why.  I mean, it’s not easy being in the shadow of Paris, Rive Gauche and Opium – those scents stand so tall it’s almost unfair to even try and share the spotlight with them.  But the fact remains that YSL has been making gents smell good since the 1970s.  Our father’s and grandfathers wore Kouros and Jazz but we wear L’Homme.  Much like Elle and Black Opium (we’ll get to that one in a minute), L’Homme shows just how good YSL are at making scents that are perfectly on trend, taking the familiar masculine tropes of woods and citrus to create something effortlessly wearable.  It’s thanks to L’Homme that we have scents such as Bleu de Chanel and Dior’s Sauvage so the brand is still setting trends, even now.

Black Opium
Finally, we have Black Opium, YSL’s latest success story and whether you love it or hate it, you cannot deny the fact that it’s a complete and utter tour de force.  This scent has picked up so many awards and it’s one I encounter regularly in the wild.  But why is it so successful and what of the Opium name does it carry in its composition?  Black Opium is the one thing consumers find irresistible right now: a gourmand, and a slightly unusual one at that.  Instead of the typical overdoses of vanilla and chocolate, Black Opium boasts delectable notes of liquorice and coffee.  Whatever your opinion of Black Opium (I’ll put my hands up and say it’s far from my favourite YSL scent) it’s hard to disagree with the fact that this generation may have found an addiction in this scent similar to the generation before did with Opium.  This one’s not quite so bad for you either..

• X is for X-Rated Fragrance

• W is For Water – The Fragrance Life Aquatic

This entry was posted on Wednesday, April 19th, 2017 at 1:56 pm and is filed under Brand Focus, Candy Perfume Boy, Fragrance. You can follow any responses to this entry through the RSS 2.0 feed. You can skip to the end and leave a response. Pinging is currently not allowed.