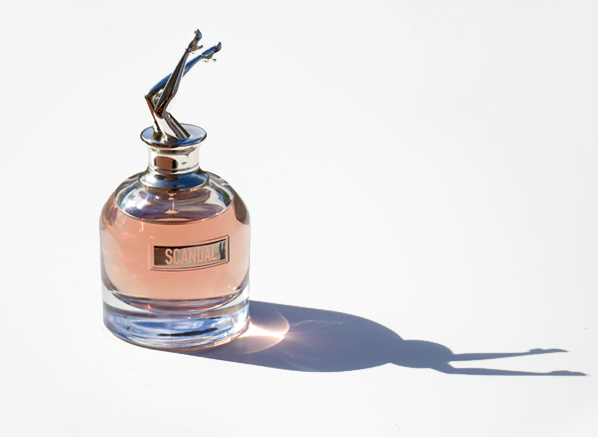 Jean-Paul Gaultier is a man who is not one to shy away from a bit of scandalous behaviour. Let’s face it, he’s not called the ‘enfant terrible’ of fashion for no reason and his cheeky aesthetic is filled with mischief and fun. This is the man that sent Madonna down the catwalk topless (and created her iconic cone bra, not to mention many other looks) and housed his first ever fragrance within a Schiaparelli-inspired bodice, and then placed said bottle inside a tin can. The Notorious J.P.G. (as I like to call him) doesn’t take fashion or fragrance too seriously, which always leads to interesting results that are guaranteed to bring a smile to one’s face.

With this in mind, it is no surprise that his brand new fragrance, the aptly named ‘Scandal’ is housed within a bottle topped with a golden pair of legs pointing upwards, whilst wearing a killer pair of heels. It gives the impression of a woman who’s had a thoroughly good night on the town – a night so good, in fact, that she’s ended upside down and slightly worse for wear. We’ve all been there, there’s no denying it, and from the man who has packaged perfumes inside generously-bulged sailors and snow globes, Scandal is very much on brand.

The idea behind the fragrance is to smash all clichés and to have fun in a manner that is extremely risqué and dare I say, a little bit sexy. Everything about the presentation leads one to think of excess and fun, from the silver statuesque legs of the lid to the velvet coating on the JPG signature tin can that houses the bottle. The scent itself is excessive and fun, with an overdose of fruits, flowers and honey coming together to create a raucous olfactory experience that is undeniably Gaultier through and through. Scandal is the scent for those who do not shy away from controversy, who don’t believe that there is ever such a thing as ‘too much’ of anything and most importantly, those who know how to have a heck of a good time. 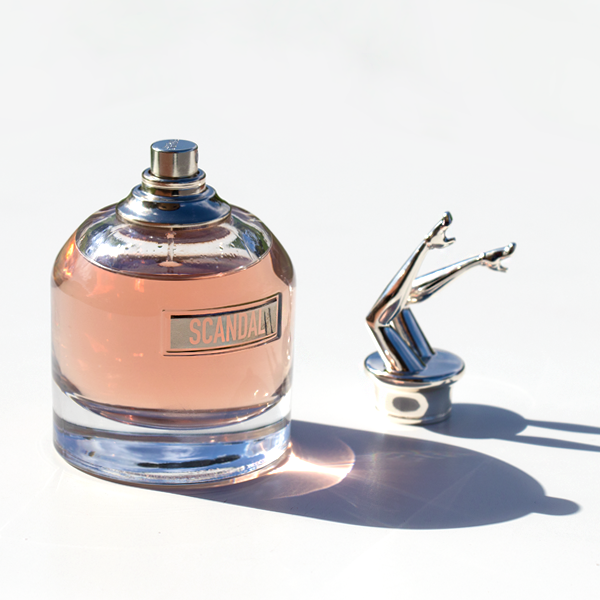 Scandal opens fruity with a capital ‘F’. The notes of blood orange and grapefruit provide an almost tutti-frutti bubblegum aspect that feels strangely fresh and neon-like. This effect acts as a quick flash, providing a rapid shock to the system that allows one to sit up and take notice. It’s a treat for the nose in the first instance and whilst the impression is sweet, it’s not heavily so, allowing Scandal to have an opening impression that feels elevated above the syrupy sweet melange of the modern scents that dominate the department stores.

The key note in Scandal’s composition is honey. Now, we often think of honey as being a sweet, caramel-like odour, and in Scandal that aspect is very much present, but it can also boast a strong animalic nuance too. There’s an ever so subtle hint of this dirty honey facet in Scandal’s heart and it brings a fuzzy sourness that is immediately recognisable as honey or beeswax. Cleverly, the honey, which contrasts sweetness and filthiness, has been paired with the gardenia, a white flower that boasts these facets in equal measure. Together these notes intertwine to create a rich candy floss accord that presents sweetness with a hidden depth (and a touch of naughtiness).

In the base, Scandal provides further contrast through the use of patchouli and musk. Don’t be frightened though, the patchouli note is far from the dirtiness of the real thing, which has an oily earthy feel to it. Instead, the patchouli adds more texture than scent, giving Scandal a fizzy, gauze-like texture that sharpens everything into focus. As a further contrast, the musk intensifies the creaminess of the fragrance ensuring that the softness and sharpness clash in equal balance, and it’s this tension that gives Scandal its uniqueness and richness.

So is Scandal as scandalous as the name and presentation would suggest? Well, I’d say not quite, but that doesn’t mean that it’s not a lovely fragrance. I think the addition of a slightly funky honey note provides a new depth to the white floral accord, amping up the sweetness to create a gourmand that feels luxurious and exotic. It’s perhaps less decadent than JPG’s flagship fragrance, Classique (it’s certainly lighter) and it somehow comes across as a bit more of a younger perfume, perfect for those who like to spend their Friday nights partying in high heels with handsome boys. What could be more fun than that?

This entry was posted on Monday, September 11th, 2017 at 9:41 am and is filed under Brand Focus, Candy Perfume Boy, Fragrance, New products. You can follow any responses to this entry through the RSS 2.0 feed. You can skip to the end and leave a response. Pinging is currently not allowed.

@escentual We joined Twitter 12 years ago today! Do we have any followers since then? #MyTwitterAnniversary https://t.co/hGNkVt0K8x
4 hours, 28 minutes ago • reply • retweet • favourite