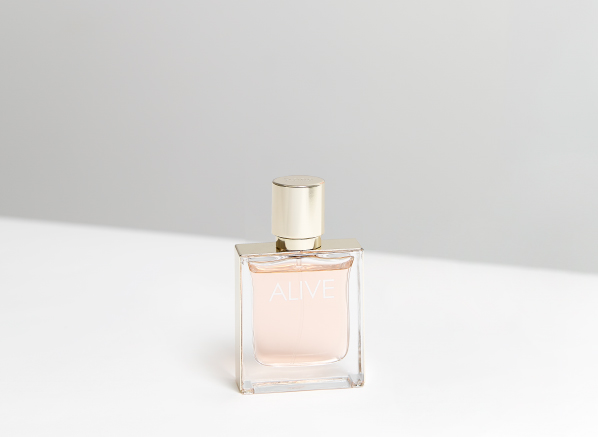 New for 2020 and designed to inspire you to be confident, Alive is all about the essence of happiness and positivity.

A true celebration of free-spirited femininity, BOSS Alive is a sparkling fruity cocktail of plum and apple with vanilla at its heart and a surprising creamy-woody side. If you’re a fan of Marc Jacobs Daisy Eau So Fresh or Carolina Herrera Good Girl, then you’re sure to love this refreshing, fruity offering from HUGO BOSS.

From the nose of renowned perfumer Annick Mernado – who’s behind some iconic scents, such as Dior Hypnotic Poison and Lancome Hypnose – comes this fresh, surprising fragrance. Don’t be fooled by the refreshing fruity opening, the perfume soon warms to a sensual, creamy vanilla-based woody aroma that’s sophisticated and wearable, and lasts long into the night.

We know at the minute that it’s difficult to find your new signature scent; counters are closed and tester samples are no more. We’ve created this review to let you know every little detail around BOSS Alive, from the scent to the sillage to the story. Let us be your nose and guide you through BOSS’ latest feminine masterpiece.

Like a bite into a crisp apple in the sweltering heat of the sun, BOSS Alive is a fresh, fruity perfume. It’s the sort of fragrance that brings a smile to your face and oozes lighthearted joy. Perhaps it’s the note of vanilla reminding me of ice cream, or the fresh plum making me think of a juicy fruit tree on a summer’s day, but to me, the scent just smells happy. Like a walk through Central Park during spring.

The innocent fragrance grows more alluring and more sensual with time as the initial fruitiness warms to a more sophisticated aroma. What started as a burst of freshness slowly transforms into an addictive creaminess, and that’s where the vanilla really takes centre stage. The cosiness of the vanilla cuts through the freshness of the fruit and leads perfectly on to the soft, woody backdrop.

A collection of contrasts that collide and create something beautiful, Alive has incorporated a variety of juxtapositions to reflect the multifaceted nature of the confident woman who wears it.

It opens with a sparkling and refreshing burst as the sweet scent blends together apple and plum. The tart apple is slightly sour, which accentuates the sweetness of the fleshy plum even more.

Despite the juicy fruits having a strong opening, the note of vanilla is an ever-present accord in this sweet mix. It adds a touch of creamy warmth to the scent, which pairs beautifully with elegant jasmine. In my opinion, the white floral heart adds a touch of sophistication to the scent and stops it from being too sweet or too innocent (or too fruity.)

The base blends together cedarwood and sandalwood, which are definitely distinguishable the longer the perfume warms on your skin. Retaining an air of graceful femininity, the woodiness remains light and soft and beautifully balances the juiciness of the fruits and the powdery petals. 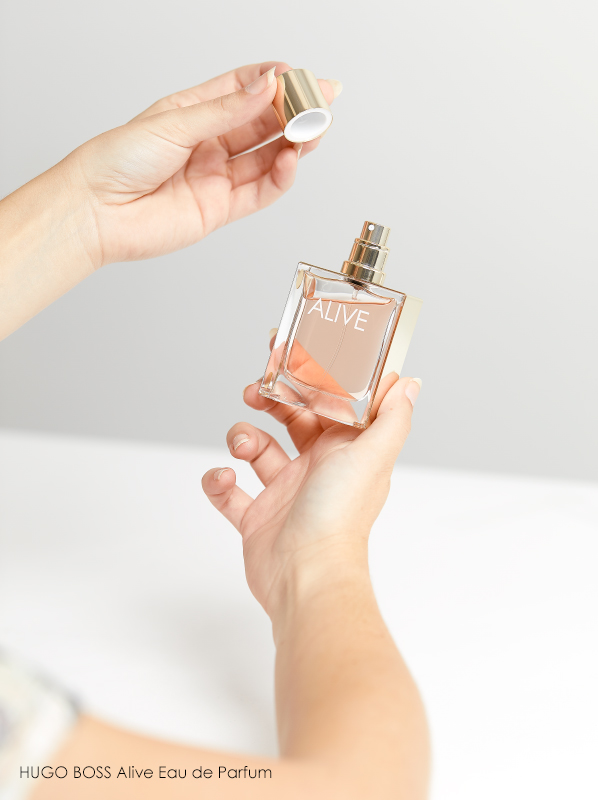 Simple, understated, elegant… that’s how I would describe this bottle. At first glance, it may not look too special, but it’s the little touches that really elevate the minimalist design.

The blush-pink juice is suspended within the bottle as a sophisticated glass edge runs the outskirt of the flacon. A flat banner of gold runs along the top and the side of the bottle, adding a surprising touch of opulence as you turn the bottle in your hand.

With HUGO BOSS, it’s all about the finer details. The golden cyclical lid is adorned with a subtle “BOSS” logo, and it’s these little attentions to detail we’ve come to know and love about BOSS. 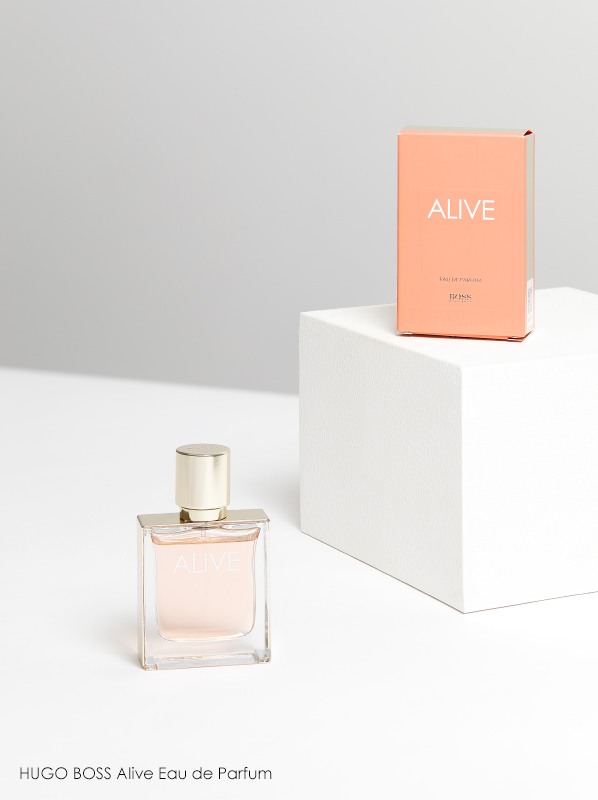 Although I’m a firm believer that anything can be unisex, this fragrance is typically on the more feminine side. There are some scents that I do think blur the boundaries between male and female, however, I wouldn’t say that this was one of them.

Bursting with classic feminine notes – including fruits and flowers – this perfume is uplifting, free-spirited and girly. I’m sure there are many people other than women who would love the prettiness of this perfume, however, if your man likes a more typically masculine, strong scent, this wouldn’t be the one for him.

How Long Does Boss Alive Last?

I sprayed this Eau de Parfum before I left work on Friday around 4pm, and could still smell the cosy woodiness on my wrists when I went to bed at 11pm. The scent on my skin was very different from the original spritz, which is something I love about this perfume as it showcases each hardworking note. The woody dry down is smooth and creamy, with an addictive warmth I couldn’t help from smelling over and over.

What Other People Think Of Alive:

Name: Dylan Bourton
Age: 22
Relationship: Fiance
If you had to describe it in three words it would be: “Sweet, summery and fresh.”

Describe Alive in more detail: “I think it’s a very girly perfume that is light and fresh. It’s something I can imagine you wearing. I definitely like the fragrance and I want to keep smelling it, it’s quite addictive.”

Where would you wear Alive?  “It would be good for a trip to the beach on a hot day, that’s what it makes me think of.”

What do you think Alive smells similar to? “A bit like a fruity ice lolly, something sweet and crisp.”

If you had to describe it in three words it would be: “Fruity, sweet and creamy.’’

Describe Alive in more detail: “I like gourmand fragrances so the vanilla is right up my street. I like that it’s sweet but not too overpowering or sickly, it’s understated but still sweet and girly. I feel like I’d forget I was wearing it after a while.”

Where would you wear Alive?  “I would swap out my day fragrance for this because I feel like it wouldn’t draw too much attention to me.”

What do you think it smells similar to?“It reminds me of a fruit cocktail covered in vanilla ice cream!’’

Why Is Boss Alive Escentual?

Designed to uplift, empower and enchant, BOSS Alive fits perfectly into our fragrance range here at Escentual. We love that this perfume takes a multitude of common feminine notes – fruits, flowers, vanilla – and blends them together in a unique and multifaceted manner, reflecting the many sides of the modern woman.

We’re firm believers in the girl boss, and BOSS Alive is definitely a scent that celebrates having the confidence and freedom to go out and be the type of woman you want to be, even if that’s a bit different than the rest.

What Do You Think Of Alive?

Is Alive for you? After reading our review, what do you think it smells similar to? Let us know by tagging us @Escentual on Twitter, Facebook, or Instagram and use #EscentualScents

• Be Part Of The New Way To Discover Fragrance

This entry was posted on Monday, September 7th, 2020 at 1:11 pm and is filed under #EscentualScents, Caitlin Daniels, Fragrance, Gifts, Tried & Tested. You can follow any responses to this entry through the RSS 2.0 feed. You can skip to the end and leave a response. Pinging is currently not allowed.