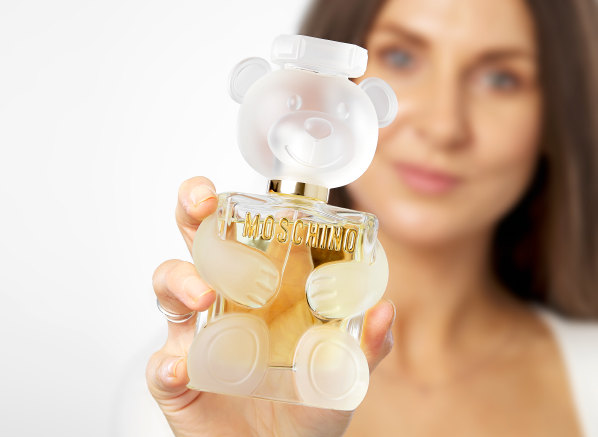 You may have noticed the 90s trend creeping back in over the last few years, and that’s not just within the fashion industry. 90s makeup, music and even interior influences are starting to infiltrate our everyday lives once again and I for one, am here for it!

It’s no secret that Moschino’s Artistic Director, Jeremy Scott, is heavily influenced by this eventful era; after all, it was around this time that he burst onto the fashion scene and quickly made his mark. His feelings heavily influence his ideas, and this goes for the Moschino fragrances he has had influence over, too.

Four years after the launch of the original Toy scent (who can forget that famous stuffed teddy bear bottle!), in 2018 Toy 2 made its debut on the Spring 2019 catwalk show in Milan. Kendall Jenner strutted down the catwalk in one of Scott’s creations, clutching a gigantic bottle of Toy 2. But it was Devon Aoki (the model famed for her role in 2 Fast 2 Furious) who was the face of the fragrance – fronting the chic but risque black and white advertising campaign wearing a plain white t-shirt with a studded leather cap and long black leather gloves. A clever campaign it depicts the fragrance perfectly – combining purity and playfulness.

Created by master perfumer, Alberto Morillas, whose extensive fragrance portfolio includes scents for Gucci, Bvlgari and Armani, as well as the iconic, CK One. Alongside Fabrice Pellegrin of Diptyque, Jo Malone and Jean Paul Gaultier fame. Together, they have produced a scent that is fresh and clean; immediately reminding you of washed laundry at the first spritz.

The note that features prominently in this fragrance is granny smith apple; combined with mandarin, it gives the fragrance an almost sweet and sour opening that’s mellowed by the inclusion of a soft magnolia note.

The heart echoes this contrast, as crisp white currant is offset with velvety peony and jasmine for a floral feminine edge

Soft notes of musk, sandalwood and amber woods provide a dreamy yet sophisticated dry down, capturing the essence of the original Toy fragrance but with a delicate nuance that’s universally pleasing, making this a perfect choice for a gift.

It has a soapy element to it that could make it perfect for everyday wear when you want to feel fresh and clean. We think it has elements of D&G’s Light Blue to it, with perhaps a little less citrus at the top, or even DKNY, Be Delicious. 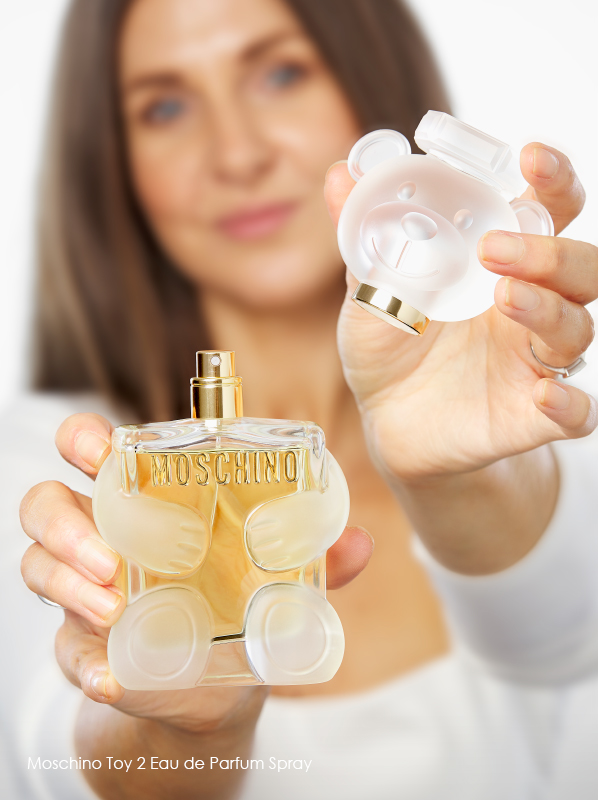 Who remembers the original Moschino Toy bottle? A glass bottle encapsulated in a stuffed teddy bear which you had to lift the head off to access. Toy 2 is a sophisticated, elegant and classier version of this – but still preserves its Moschino playful twist and is often likened to a champagne flavoured gummy bear!

It is presented in a glass bottle with frosted, opaque finishes and gold detailing around the collar and lettering that makes it feel premium and reminds you of Moschino’s designer heritage.

In this day and age, any fragrance can be unisex; we think that perfume should be bought for its smell and not for who it’s intended for. Marketed as a female fragrance, Toy 2 does have a heavy floral influence, however, it’s laundry-fresh dry down means that both men and women could enjoy wearing this.

What The Team Think Of Moschino Toy 2:

If you had to describe it in three words it would be: “Sweet, fresh and clean.”

Describe Toy 2 in more detail:
“I’m a big fan of Toy Boy that launched this year and, even though this isn’t the same because Toy Boy is a lot spicier and sensual, I love Toy 2 for different reasons. It feels really feminine and classically fresh – like a crisp white shirt.”

Where would you wear it?
“I’d imagine wearing this to work; it’s perfect for an important meeting when you want to feel put-together and confident but without being too overpowering – it has an approachable vibe to it.”

What do you think it smells similar to?
“Freshly washed laundry or that smell when you first get out of the shower. It actually smells a little like Pantene shampoo!”

If you had to describe it in three words it would be: “Fruity, light and playful.”

Describe Toy 2 in more detail: “This is the first time I’ve smelt it and it’s not what I expected at all. I used to love the original Toy perfume from Moschino but this is quite different – it’s more floral and fresh but still playful and flirty so feels very in-line with Moschino’s previous offerings but with perhaps more of a sophisticated edge to appeal to a wider audience.”

Where would you wear it?
I wouldn’t wear it myself but I know exactly who would; my best friend who wears Moschino Fresh Couture. She’d love this! I’d say it was definitely a day-scent, though, because it’s not overpowering.”

What do you think it smells similar to?
“It reminds me a lot of Diesel Loverdose Eau de Parfum. I think people who love that would really love this scent, too.”

Get to Know Moschino Fresh Couture

This entry was posted on Sunday, November 8th, 2020 at 9:00 am and is filed under Elisabeth Rilatt, Fragrance, Fragrance Review, Tried & Tested. You can follow any responses to this entry through the RSS 2.0 feed. You can skip to the end and leave a response. Pinging is currently not allowed.

@escentual News just in! There's still time to enter our Instagram competition to be in with a chance of winning the Initio He… https://t.co/nbuTzL5pH0
1 day, 6 minutes ago • reply • retweet • favourite

@escentual Thank you, Issey Miyake, for making the fragrance and fashion world a more beautiful place❤️ Your legacy will live on forever #isseymiyake
2 days, 3 hours ago • reply • retweet • favourite

@escentual We're prepared for a week of sunshine here at Escentual with our #summer makeup bags ready to go! ☀️ Head over to… https://t.co/7mvMCFbQRT
2 days, 19 hours ago • reply • retweet • favourite

@escentual Delina is one of @ParfumsdeMarly's best-selling perfumes, so we know a lot of you will be excited to hear that the… https://t.co/rkrMNyzXIr
4 days, 3 hours ago • reply • retweet • favourite