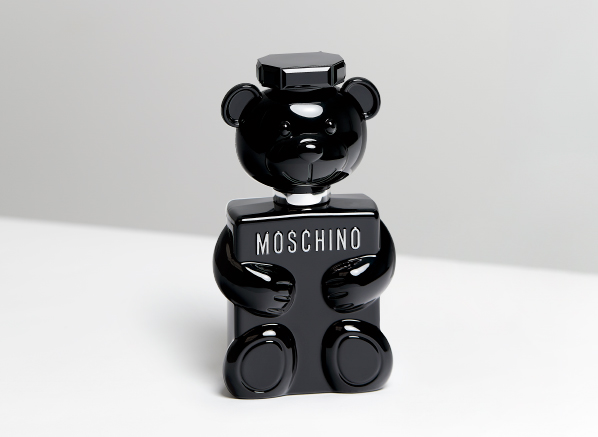 Headed by artistic director, Jeremy Scott, Moschino aims to have fun and ‘not care’. These concepts are evident in both their iconic fragrances and their controversial fashion on the runway. In perfect synergy, their perfume and clotheslines are always closely linked and draw inspiration from each other. With ‘fluffy bear fragrance’ Toy, starting life as an anti-fur campaign which later developed into a ‘Ready To Bear’ clothing collection.

The most recent addition to the Toy range, Toy Boy is as controversial and risqué as you’ve come to expect from Moschino. It’s safe to say that there is no other fragrance like it; Toy Boy is so unique, in fact, that if you ask anyone how it smells you’d be hard pushed to get a straight answer because it’s that different! But, if we had to describe it? We’d say it’s spicy and peppery and if we had to liken it to an existing fragrance? It would Comme des Garcons black pepper and Marc Jacobs Bang.

Even though you’d say that all fragrances change on-the-skin, this one really does; with 13 notes there are so many stages to this Eau de Parfum. And, although the structure is complex, each note works perfectly together.

As soon as you spray you’ll experience a vibrant pepperiness, bergamot and nutmeg, which feature as the most prominent notes in the first minutes of the fragrance but this shifts every few moments between spicy, sweet and fresh. The energetic opening fades into the intense clove heart that features throughout the longevity of this fragrance. Alongside soft notes of rose, which isn’t traditional in men’s fragrance but adds a soft feminine touch. As it develops the fragrance completely changes from its lemony opening to a cool spicy, almost balsamic dry down, which features amberax and cashmeran.

As mentioned above we think it smells like a less peppery and more feminine Comme des Garcons black pepper and Marc Jacobs Bang. 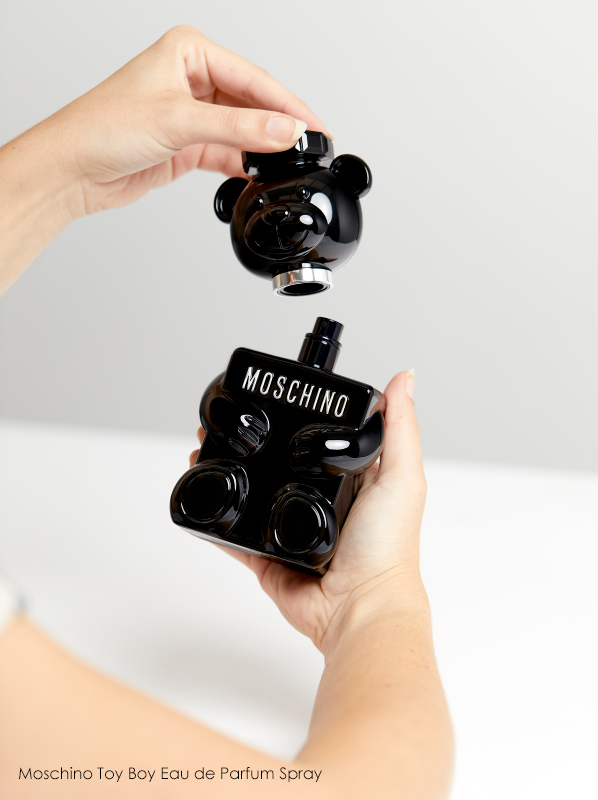 It was originally meant to be a gentleman fragrance but women love its spicy sensualness and would wear it as their signature.

How Long Does Toy Boy Last?

Toy Boy is an extremely long-lasting fragrance, so much so that if you spray it on your jacket, you’ll still be able to smell when you pick it up a few days later! And, if you love smelling of your fragrance from top-to-toe, you can use the Toy Boy body products to help boost the aroma on your skin hours after you’ve spritzed. The high concentration of Eau de Parfum in the shower gel makes it very strong-smelling as its made up of the cool spicy base notes of the fragrance. After washing follow with the scented body gel, which again features its base notes and also leaves a pleasant tingling sensation. When used together, they will make sure you get hours of wear and your skin will be moisturised afterwards. 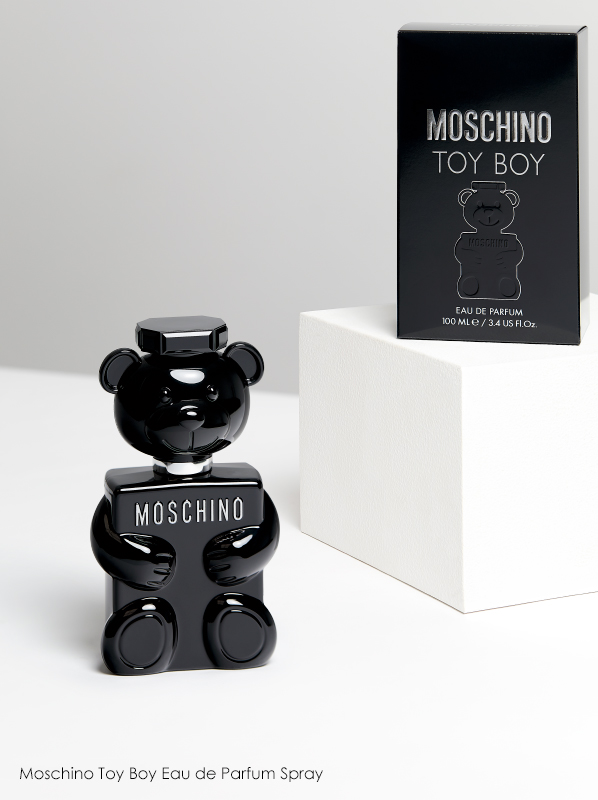 The black lacquered teddy pays tribute to their first limited edition soft toy teddy fragrance which in true Moschino style, you had to decapitate to access the bottle. As always their fragrance is inspired by their runway fashion and follows on from their iconic ‘Ready To Bear’ collection, which was released at the same time as their Toy 2 Eau de Parfum.

What Our Team Thought of Moschino Toy Boy

If you had to describe it in three words it would be: “Sensual, dark and mysterious.”

Describe Toy Boy in more detail:
“It’s sexy and woody and essential for any bachelor’s bathroom shelf. I love the bottle and the scent is just as sexy as the fragrance. And, I think the scent would be appealing to the opposite sex.”

Where would you wear it?
“I’d wear this on a date night because I know my wife loves it (I already own this and she steals it all the time!).”

What do you think Toy Boy smells similar to?
“It reminds me of me of my youth because it’s something I would have loved to have worn in my early twenties.”

If you had to describe it in three words it would be: “Spicy, fresh and unisex.”

Describe Moschino Toy Boy in more detail:
“It’s marketed as a male fragrance but I think it could pass as a unisex. I’m not normally into gimmicky things but I do love this black teddy bear bottle because it looks chic and edgy. I find the fragrance really intense but isn’t at all overwhelming.”

Where would you wear it?
“I would wear this to work because I think it works perfectly as a day scent.”

What do you think it smells similar to?
“When I first smelt it reminded me of CK one – but not the scent, just the unisex vibe and the feeling that it can be worn by anyone.”

Our Predictions For Toy Boy:

We hope this isn’t the last release from Moschino’s Toy line, they are too much fun! We think a flanker with another revamp of the iconic bear is on the cards, but as for the scent? It could be anything – but if we had to choose; we’d have our fingers crossed for a gourmand or green fragrance as they haven’t done this yet.

What Do You Think Of Moschino Toy Boy?

Over to you! Do you think you’ll like Toy Boy? After reading our review, what do you think it smells similar to? Let us know by tagging us @Escentual on Twitter, Facebook, or Instagram and use #EscentualScents

• Be Part Of The New Way To Discover Fragrances

This entry was posted on Wednesday, September 16th, 2020 at 7:47 am and is filed under #EscentualScents, Fragrance, Fragrance Review, Hints & Tips, Keavy Slattery, New products, Tried & Tested. You can follow any responses to this entry through the RSS 2.0 feed. You can skip to the end and leave a response. Pinging is currently not allowed.

@escentual Missed out on our #EscentualScents vanilla reveal? Find out all about each scent with our quick recap:… https://t.co/T99en5yKeK
3 days, 6 hours ago • reply • retweet • favourite

@escentual Do you find applying SPF to your little one tricky? Try these three ways for making sure you apply SPF correctly to… https://t.co/Kw1Z1INnxA
2 days, 14 hours ago • reply • retweet • favourite