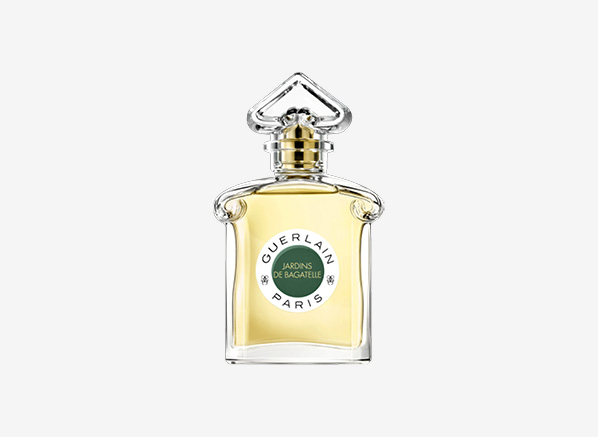 For well over a century, five generations of GUERLAIN master perfumers have worked to create daring and powerful fragrances with scintillating stories behind them. These emblematic fragrances have been curated into the Legendary fragrance collection, proudly displaying GUERLAIN’s heritage and celebrating the master craftsmanship behind every legend. A bewitching floral, GUERLAIN Jardins de Bagatelle Eau de Parfum is a stunning addition to the line as it celebrates the delights of nature with its symphony of white florals and woody tones.

Laced with a beautiful overload of neroli, jasmine and gardenia, Jardins de Bagatelle is a powerhouse of opulent white florals. It has an initial bright sunniness, thanks to bergamot, before the fragrance melts into its intoxicating white floral heart. Finally, the woody base grounds the fragrance, providing an almost musky platform for the white flowers to sing from as a carnal tuberose note with a slightly green nuance joins the composition.

All in all, GUERLAIN’s luminous fragrance is somehow both sparkling and joyous whilst also having captivating a underlying earthiness that counterbalances the sweetness of the flowers.

Jardins de Bagatelle Eau de Parfum has a beautiful story behind it, as well as a darker side to it. Inspired by the tiny castle found in Paris’ most romantic garden – the French Bagatelle – the heady floral mix is a recreation of the dazzling array of flowers found in nature. However, the tuberose ingredient is said to have aphrodisiac powers and has been historically misunderstood: Louis XVI believed unwed pregnant women would faint after smelling tuberose, so the scent filled the King’s court to identify these individuals.

If you love floral scents, especially heady white florals, you’ll swoon over Jardins de Bagatelle. The florals have met their perfect pairing with a warm woody base, giving the scent a sultry feel whilst still maintaining the joyful sweet-fresh tone of florals.

Jardins de Bagatelle is unmistakably floral, with a natural scent that transports you to a blooming garden in springtime as the evening dew prepares to approach. There is also an Eau de Toilette variation of Jardins de Bagatelle – the original version of the scent – which is similar to the Eau de Parfum but with an added sweetness and an overall lighter feel.

Due to its romantic floral tone, Jardins de Bagatelle is positioned as a female fragrance.

Flowers may appear sweet and innocent, but in GUERLAIN Jardins de Bagatelle Eau de Parfum they pack a punch, resulting in a long-lasting, floral-woody aroma. The woody base and white florals remain prominent as the scent wears on the skin, offering a very impressive longevity which I’ve only come to expect from GUERLAIN’s master perfumers.

Jardins de Bagatelle looks like golden sunlight stretching out over a luscious royal garden. The rich honeyed-gold tinted perfume emphasises the gold nozzle, embossed with an elegant GUERLAIN emblem that reflects the timeless beauty of the brand. The bottle showcases the iconic GUERLAIN Art Nouveau-inspired glass scrolls, finished by the avant-garde ‘inverted heart’ stopper that ties the entire Legendary collection together.

Yes,this is a great perfume - and the price at Escentual.com is pretty competative. A highly recommended product generally.

This entry was posted on Friday, December 10th, 2021 at 8:15 am and is filed under Fragrance Review. You can follow any responses to this entry through the RSS 2.0 feed. You can skip to the end and leave a response. Pinging is currently not allowed.

@escentual Do you ever wear a particular perfume because it makes you feel a certain way? We certainly do! And we thought we'd… https://t.co/nnkFkKFwpp
3 days, 2 hours ago • reply • retweet • favourite

@escentual @Jack95862637 Thank you for reaching out. We are so sorry to hear you are experiencing problems with your order. Pl… https://t.co/kqOwj8mVDc
4 days, 1 hour ago • reply • retweet • favourite

@escentual A simple yet effective hydrating skincare routine for men, check! Have you ever heard of Lab Series? 🧴… https://t.co/A02ixAkXhK
4 days, 16 hours ago • reply • retweet • favourite