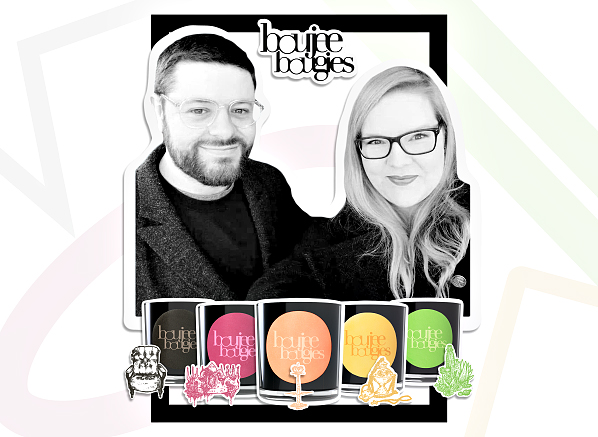 Are you career-focused, driven and looking to be inspired? #EscentualMeets is your source of motivation. Every month, we reveal the grit, success and stories of a selection of the world’s leading beauty founders…

There’s no other candle company like Boujee Bougies. With an in-house perfumer, the British indie brand creates home fragrances that no one has ever smelt before. Praised for their unique, high-quality and innovative scents, Boujee Bougies are fast-becoming the ‘it’ candle brand for fragrance lovers. In this #EscentualMeets, we discover how two fragrance fans, Pia Long and Nick Gilbert, joined forces to create their own fragrance house, consultancy, and candle brand…

1. Where It All Began
2. From Friends to Co-Founders
3. Launching Boujee Bougies
4. The Future
5. Business Advice

1. Where It All Began

Pia describes her school life as “a little bit unusual”. She attended a Finnish-Russian school for 12 years in Finland and then studied Translation, Interpretation and Linguistics at university. After university, she followed her love of art to England, where she attended the London College of Fashion. “I trained to become a film, TV, and theatre makeup artist and hairstylist. And as part of that, we also learnt about the history of costume, hair, and cosmetic science. And so we got to make lipsticks and look at the formulation side”. Pia became passionate about beauty and formulating cosmetics, landing several jobs in department stores while studying before getting her first fragrance role as a fragrance distributor and then becoming a Trainee at Lush. “When I was a trainee, they let me into the creative side of things. And I was entirely new to all of the formulations regarding fragrance. But I had some idea about formulating cosmetics because of the education. And so I took to it really fast. And I got very excited about the possibilities.” Pia became a Junior Perfumer at Lush and worked there for seven years. Afterwards, she joined a small family-run ingredient and fragrance supplier and was a consultant for a colleague at the British Society of Perfumers before founding Olfiction.

Nick’s journey to fragrance was very different to Pia. “I went to university to study psychology. I chose modules about addiction, brain function, and psychopharmacology. I thought I wanted to be an addiction counsellor. It turns out I did not want to do that; I wanted to do the ‘perfume stuff’ I was doing on the weekends. I was selling perfume at Boots on the weekends and was really good at it. I really enjoyed it”. When Nick graduated in 2006, he kept working in Boots and started fragrance writing, which marked the beginning of his exciting career in the perfume industry.

2. From Friends to Co-Founders

Pia and Nick thank the fragrance website Base Notes for their meeting. Pia said, “It’s the original gathering place online for perfume nerds. And I was posting there and participating in the community. I then proposed to Grant (Base Notes Founder) that we should do a face-to-face meeting in London because they’d been doing them in the US. So we coordinated with Grant to organise it. Nick had also been a member of Base Notes, and we met there”. The pair instantly became friends, bonding over their love of all things olfactory, recalls Nick, “But I do think that sometimes people come into your life, and they’re meant to be there. We’re terrifyingly similar as we’ve come to know each other over the years. And we have a similar background if you like because we both come from unexpected places if you’re talking about the perfume industry. We’ve got these shared interests, these shared passions, and this very, very weirdly similar approach to things”.

It was these shared passions and similarities that gave Pia and Nick the idea to start their own business. Pia remembers the moment the idea came up, “I was spending a lot of time in a lab, so I became less aware of what new perfumes were out. And I kept meeting up with Nick once a year for a quick crash course on what were the worthy new launches. We’d go around by ourselves in London and sniff everything. And Nick would say, no, this is great, no, this isn’t worth your attention, don’t waste your nose, showing me around everywhere. We shared an understanding of how to describe the scents. Then, a few years later, we both had reached a point in our other jobs where we wanted to leave. And Nick became available just after I’d finished a contract with a colleague. We jokingly said how we should start a business one day”. That business later became Olfiction, a fragrance house and consultancy where Pia, Nick and their team tell stories through fragrance for some of the world’s best brands.

Olfiction was just the beginning for Pia and Nick. Nick specifically had big dreams about what came next, “One morning, I woke up having dreams that we had a candle brand, and it was called Boujee Bougies. And I thought it was the funniest thing. So I told Pia, and she was like, let’s do it”. The duo knew they had the know-how to make this idea a success, “I had done hundreds of candle fragrances for other brands. I had the opportunity to understand which materials worked for candle wax and which didn’t, what kind of odour profiles customers like, and what isn’t out there and maybe should be. We also wanted to have a playground for our storytelling and the fragrance. We wanted to have somewhere where we could have fun with our skills and show off a bit because we knew that we wouldn’t compromise on the fragrances. That was the most important thing, and not go straight into a brand of perfumes because that’s what you’d expect”, said Pia. Luckily for Pia and Nick, they make a great team says Nick, “Usually, what one of us is thinking, the other is also sort of thinking and on the same page. And so that makes it very easy to run a business together. We’re very often having the same thought at the same time. It’s terrifying”.

Boujee Bougies is in its infancy, and there are a lot of exciting plans ahead, says Pia, “Well, two new candle fragrances are coming out sometime this year. We’re hoping in time for Christmas. And we’re very excited about them. I don’t want to give too much away, but one of them is a real twist on a familiar theme that takes it to extreme levels. Thomas Dunckley did some fantastic creative direction for that! And so it’s Thomas’s project. And the other one is my obsession with some things that I can’t get enough of, so I made a candle for myself. Then we have perfumes coming next year. I want to say four perfumes at the moment, one of which will be a limited edition. One thing I want to say about the perfumes is that they’re not exactly the same as the candle fragrances; they have a shared kernel of inspiration. And you will recognise the common thread. But they are fine fragrances; they are perfumes fully fleshed out in their own right and have their own character. And they contain a small element of the existing candle fragrances”.

As well as new launches, the future for Boujee Bougies will focus on growing brand awareness, their small team and in Nick’s own words, “Boujee Bougies world domination!”.

Pia and Nick are tremendous role models for anyone looking to carve out a career in perfumery. They showcase that you don’t have to follow the traditional routes and that dreams can become a reality! On their best business advice, Pia thinks positive environments and respect are crucial to any business’s success, “I would advise having awkward or difficult conversations sooner rather than later. So if you have anything that’s creating a bit of a moment with a colleague or a staff member or supplier, in any circumstance, discuss it calmly as early as possible, don’t let things stew and develop and develop into massive misunderstandings or resentment. Be open, be prepared to be uncomfortable, and be vulnerable. The more real you are, your business is ethical and a nice place to be in; there’s no toxicity and no bad atmosphere”.

This entry was posted on Thursday, August 18th, 2022 at 9:00 am and is filed under #EscentualMeets, Escentual, Fragrance. You can follow any responses to this entry through the RSS 2.0 feed. You can skip to the end and leave a response. Pinging is currently not allowed.

@escentual Do you find applying SPF to your little one tricky? Try these three ways for making sure you apply SPF correctly to… https://t.co/Kw1Z1INnxA
2 days, 4 hours ago • reply • retweet • favourite

@escentual Looking for that #FridayFeeling? Prada Paradoxe is the perfect floral scent to carry you through whatever you have… https://t.co/ZzU00dQGmY
2 days, 21 hours ago • reply • retweet • favourite

@escentual If you cringe when we say: orange lines, white patches, tiger bread skin, streaks, and an orange hair line, then yo… https://t.co/pKqar5xzYg
3 days, 18 hours ago • reply • retweet • favourite

@escentual @CharlotteScan11 Hey Charlotte, So sorry for any inconvenience this has caused you. If you speak to our customer se… https://t.co/VmIKaNDuWS
4 days, 4 hours ago • reply • retweet • favourite