The History of GIVENCHY 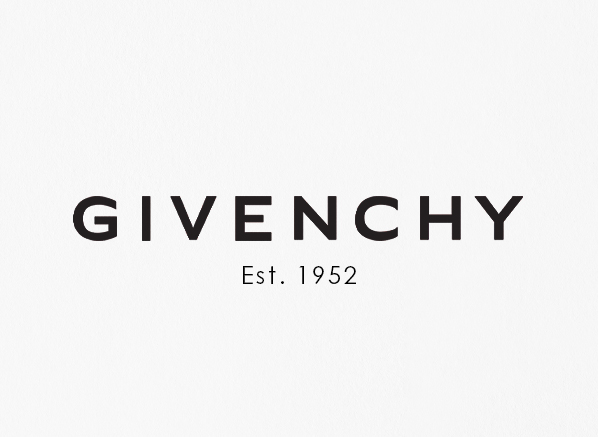 Escentual is home to some of the world’s most beloved premium beauty brands, and frankly, we don’t shout about them as much as we should. So, over the next few months, I’ll be putting this wrong to right by delving into the history of our top luxe brands to show why they’re so revolutionary as I unveil the ways they’ve shaped the beauty industry over the years. 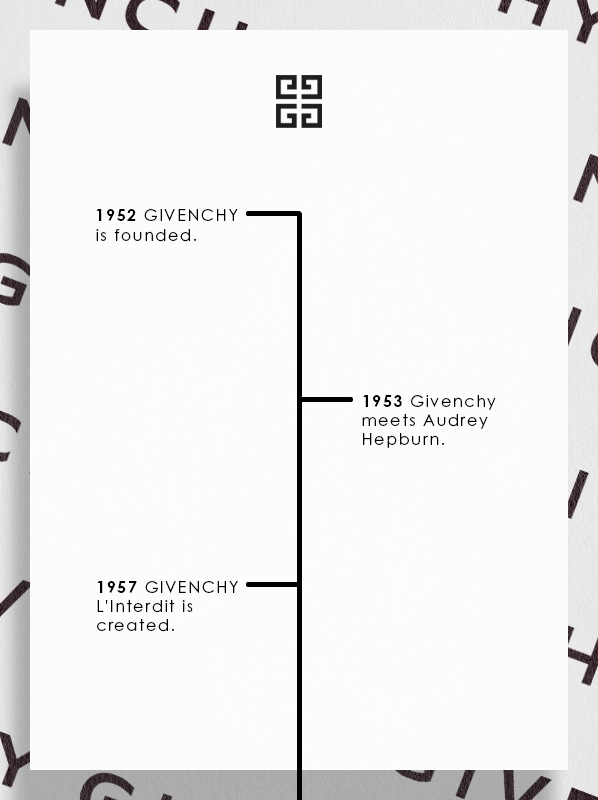 Pronounced zhee-von-shee, GIVENCHY was founded by French-born Hubert James Marcel Taffin Givenchy de when he was just 24 years old. After moving to Paris in 1944 and working with several fashion designers, Givenchy went at it alone to open his very own house in 1952. To put this into context, this was the year that Elizabeth II was crowned – and it’s fair to say that GIVENCHY’s reign has proved just as long-standing.

But what is GIVENCHY best known for? Although the brand would ultimately take over the skincare, makeup and perfume world, at this point, GIVENCHY’s speciality was haute couture fashion.

Givenchy’s early designs broke the norm by turning away from the constricted, conservative looks of the day. His first-ever collection was presented on February 2nd 1952, changing the course of fashion with the forward-thinking “separates” collection comprising elegant blouses and light skirts as wearable individual pieces. The star of the show has to be the now-iconic Bettina blouse, which consisted of a highly detailed cotton blouse modelled by model Bettina Graziani, whose name became synonymous with the style. If we have anyone to thank for smart-casual, it’s GIVENCHY.

Just one year after GIVENCHY was founded, another key event occurred. In 1953, Givenchy met Audrey Hepburn, and her lifelong friendship with Givenchy – whom she described as her best friend – went on to shape both of their careers. Hepburn was subsequently deemed Givenchy’s muse, and he went on to design many outfits for her – both within her career and her personal life.

In the following year, Givenchy’s became the first couturier to launch a prêt-à-porter collection, which offered ready-to-wear luxury clothing that could be produced en masse, making premium designs available to a whole new audience. It’s fair to say that ‘54 was a good year for Givenchy; he also met his life-long idol and subsequent mentor, Balenciaga, who would inspire him throughout his career.

One year later, Givenchy presented his first shirtdress; the evolution toward lantern shapes would become iconic.

1957 was another stellar year for the fashion house as GIVENCHY ventured into the fragrance world, releasing the icon that is GIVENCHY L’Interdit. The perfume took the concept of a ‘signature scent’ to new heights as it was originally created exclusively for Audrey Hepburn. Of course, it was met with immense popularity upon its release one year later – after Hepburn alone had worn it for the entire year. In 1957, L’Interdit made fragrance history as Hepburn became the first actress to become the face of a perfume. The scent was reinvigorated in 2018 when actor Rooney Mara took over as the face of the fragrance. 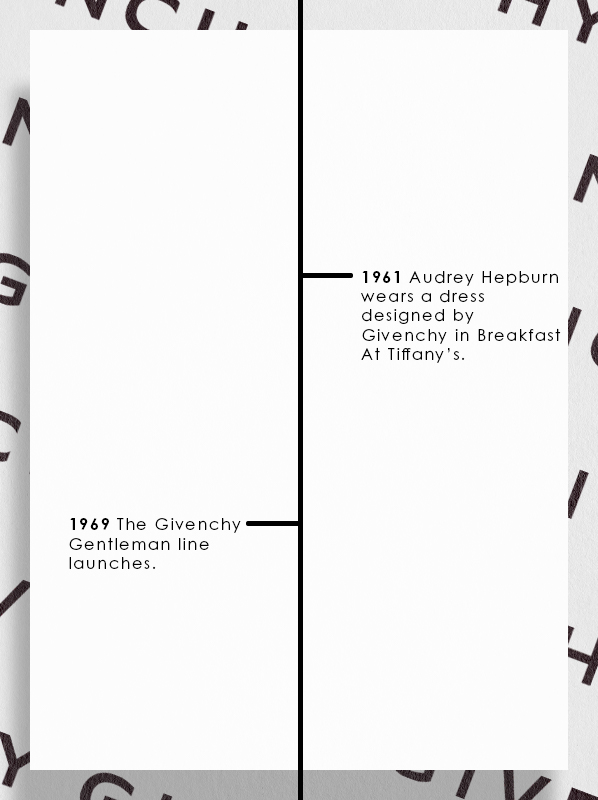 Now, we reach my personal favourite moment in the history of GIVENCHY: ahead of the release of 1961 cinematic classic, Breakfast At Tiffany’s, Givenchy designed the iconic little black dress that Hepburn wore during the opening scene. Of course, the accessories were just as important, and Givenchy also selected them: pearl choker necklace, foot-long cigarette holder, large black hat and opera gloves included.

But if you’re a fan of the movie, you’ll notice that Hepburn wears a long black dress. In reality, the original LBD was never to be; deemed to ‘show too much leg’, the number was adapted by award-winning costume designer Edith Head, who transformed it into a floor-length piece, although Givenchy was still credited with the design. To this day, three copies remain of Givenchy’s original LBD. One hand-stitched dress remains in the house’s private archives, one is on display in Madrid’s Museo del Traje, and the other sold for £467,200 to fund a school building project in Calcutta after Givenchy donated it to an auction.

But it wasn’t just Hepburn who Givenchy got to dress in ‘61; Jackie Kennedy wore one of his dresses to visit Versailles in the same year, highlighting the breadth of Givenchy’s influence and artistic flare.

In 1969, the “Givenchy Gentleman” line was launched as the brand expanded into men’s fashion. 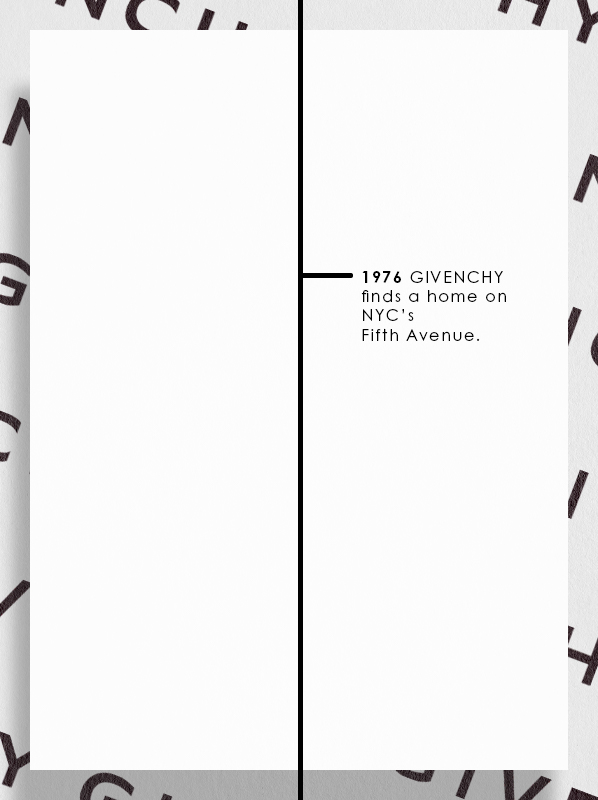 In 1976, GIVENCHY continued to grow, setting its sights on NYC as the fashion house opened showrooms and offices on the infamous Fifth Avenue during this year. 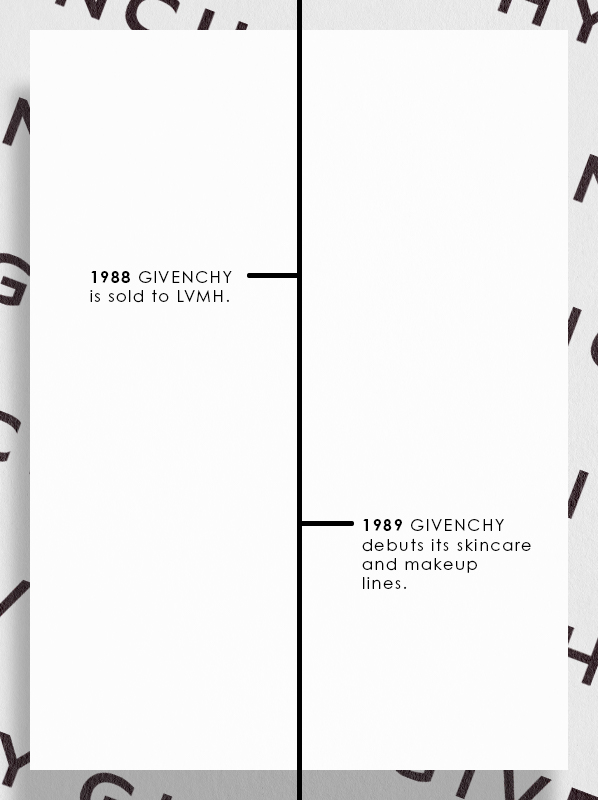 If you’re wondering who owns GIVENCHY, it’s at this point that your question is answered; in 1988, GIVENCHY was sold to luxury goods conglomerate LVMH, who still owns the fashion house and its beauty subsidiary to this very day.

In 1989, GIVENCHY debuted both its skincare and makeup lines. Created from a desire to offer innovative formulas to target multiple skin concerns, the skincare collection was born from extensive scientific research – and would go on to. The makeup line was launched with Le Prisme Visage, a revolutionary four-in-one face powder that seems like an ancestor of another iconic GIVENCHY powder… 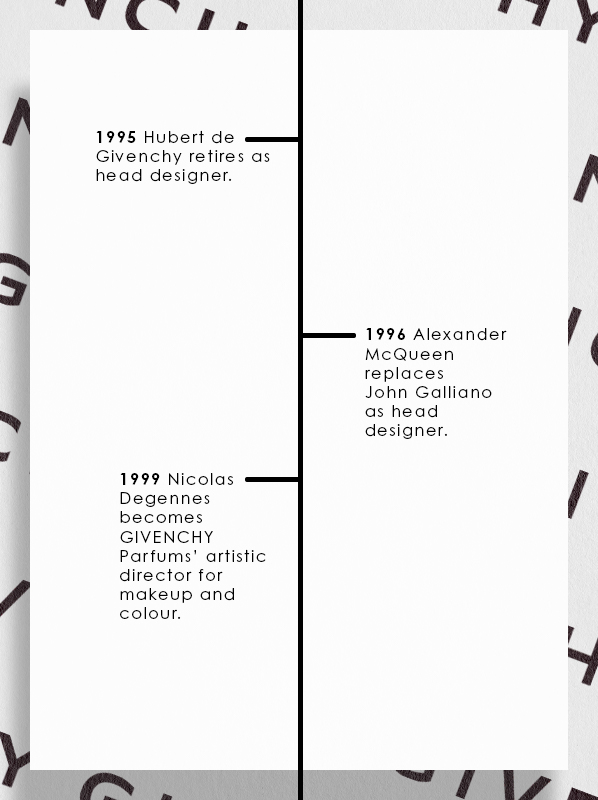 After 43 years at the helm, Hubert de Givenchy retired as head designer in 1995. His replacement, John Galliano, made fashion history upon his appointment as he became the first British designer to head a French couture house. 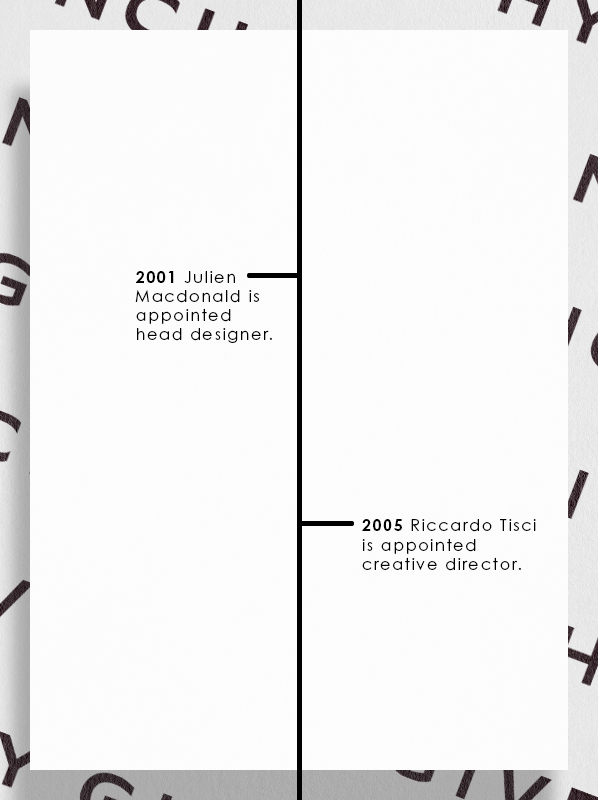 The millennia marked the start of something new for GIVENCHY, too, as Julien Macdonald took over from McQueen in 2001.

Four years after Macdonald’s appointment and following two years without a head designer, Riccardo Tisci was appointed creative director and held the position for the longest period since Mr Givenchy himself as he stayed in the role until 2017. 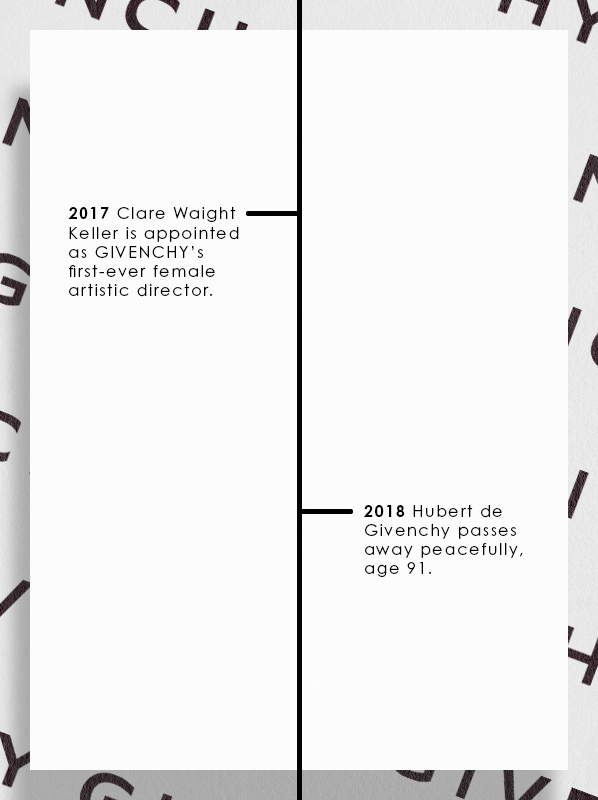 Nicolas Degennes joined as Artistic Director for colour and makeup in 1999, but in 2013, he made one of his greatest marks on the GIVENCHY beauty line. Inspired by the avant-garde nature of Givenchy’s runway looks, Degennes introduced the Couture Line, which is home to some of the premium beauty world’s most iconic formulas: the Le Rouge lipstick and Teint Couture foundation included.

In 2018, the world mourned the loss of fashion revolutionary and creative icon Hubert de Givenchy after he passed away peacefully in Paris at 91. 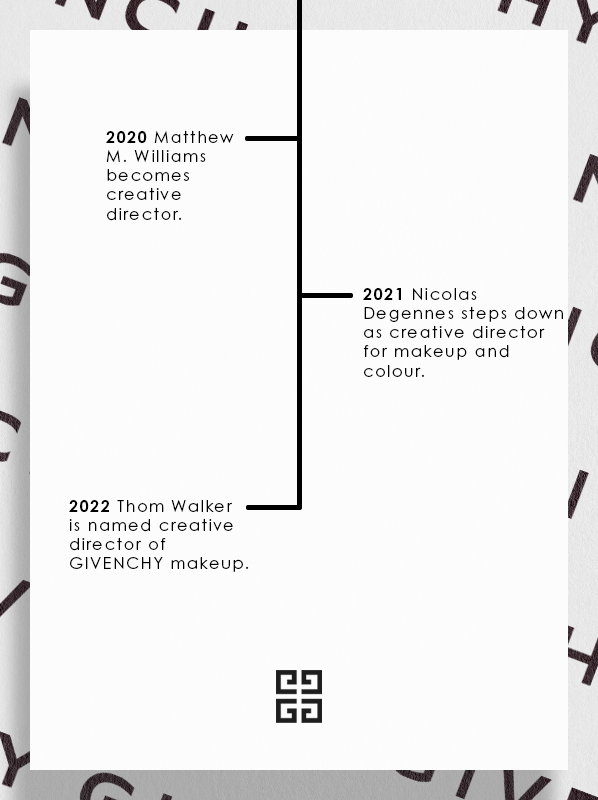 In June 2020, Californian-born Matthew M. Williams took over as the creative director of GIVENCHY’s women’s and men’s collections. A self-taught designer, Williams has a flair for translating cultural undercurrents into high fashion, so we’re excited to see the way that he will continue to shape GIVENCHY’s legacy in the future.

But that isn’t the only recent change for GIVENCHY; in 2022, Thom Walker was announced as Makeup Creative Director, and we’re all eager to see the direction that GIVENCHY’s makeup lines will take with him at the helm.

As we wrap up our journey through the history of GIVENCHY, I want to tease you about what we can expect from them in the future. They have plans to open over twenty boutiques every year throughout the world, particularly in the United States, the Middle East, Europe and Asia. But GIVENCHY have also set themselves ten resolutions to achieve by 2025 as they aim to achieve 100% traceability on all natural ingredients and promote a more eco-conscious stance throughout their products and throughout the house.

Do you have a question about the history of GIVENCHY that we haven’t answered? Tweet us @Escentual with your query!

5 Makeup Launches That Shouldn’t Be Forgotten In 2022

This entry was posted on Tuesday, December 27th, 2022 at 9:00 am and is filed under History. You can follow any responses to this entry through the RSS 2.0 feed. You can skip to the end and leave a response. Pinging is currently not allowed.

@escentual Trying to make it to January payday... #Valentino We have so much love for Kristen McMenamy and @MaisonValentino… https://t.co/Lr664ECUEn
1 day, 15 hours ago • reply • retweet • favourite