The History of GUERLAIN 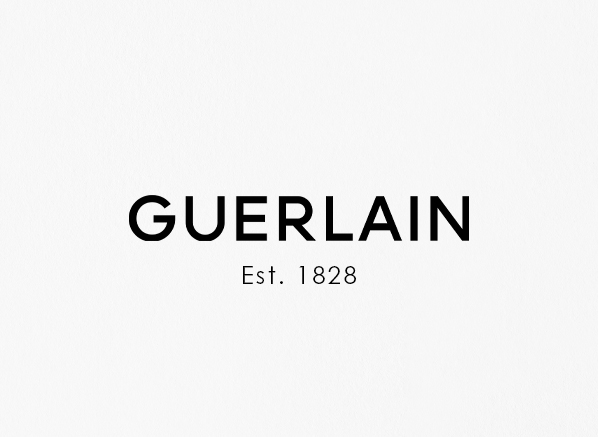 GUERLAIN is one of the world’s most best-loved luxury beauty brands. And in just a few years, the brand will be celebrating its 200th anniversary. But before we reach those celebrations, I want to go back to the very beginning to show how the brand has grown to get where it is today: a house that’s produced over 1100 fragrance creations since 1828, and a fair few skincare and makeup icons for that matter too.

Join me to explore the history of GUERLAIN… 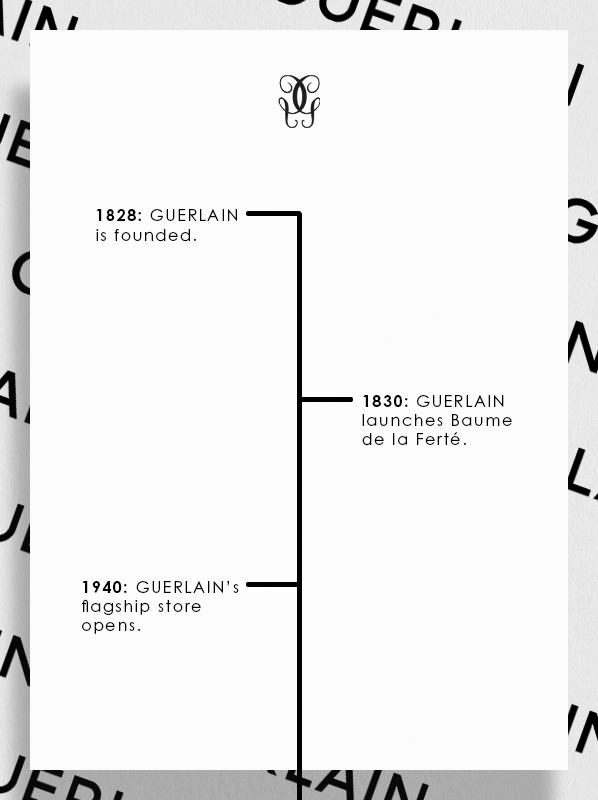 GUERLAIN was founded in 1828. The man behind the brand was perfumer, chemist and inventor, Pierre-François-Pascal Guerlain, who founded his first boutique in the heart of Paris.

During the same year the brand was founded, Pierre-François-Pascal Guerlain created a liquid product that added colour to the lips and cheekbones; it proved an instant hit.

Although GUERLAIN was predominantly known and respected for its perfumery to begin with, it didn’t take long for this luxury fragrance house to branch out. In fact, it’s said that GUERLAIN’s iconic Baume de la Ferté was created as early 1830, which was used to soothe sore nipples during breastfeeding, and to also relieve chapped lips too. 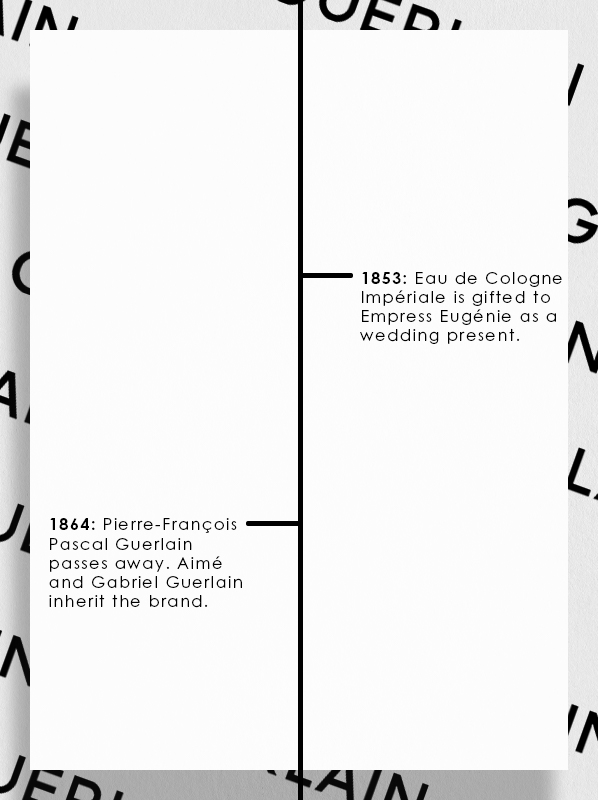 By the time we reach the 50s (the 1850s, that is) the House of GUERLAIN is well established. But it isn’t just members of high society who have fallen for the charms of GUERLAIN. In 1853, for the marriage of Napoleon III and Empress Eugénie, the 1830 fragrance, Eau de Cologne Impériale, was gifted to the young bride as a wedding present. This resulted in Pierre-François gaining the title of ‘His Majesty’s Official Perfumer’. Over the years, he would go on to create fragrances for the likes of Queen Victoria and Queen Isabella II of Spain.

It was at this time that the emblematic bee came to represent the House of GUERLAIN. The fragrance bottle was decorated with the bees of the Empire, and the honey-loving creatures would go on to become synonymous with GUERLAIN.

The 1860s marks a change for the house of GUERLAIN. Sadly, in 1864, the founder of the house, Pierre-François, passed away. The House of GUERLAIN was left in the capable hands of his sons, Aimé and Gabriel Guerlain. Gabriel took on the role of manager, while Aimé became the master perfumer. Thus, a 150-year tradition was born: the role of head perfumer would be passed on through the Guerlain family line. 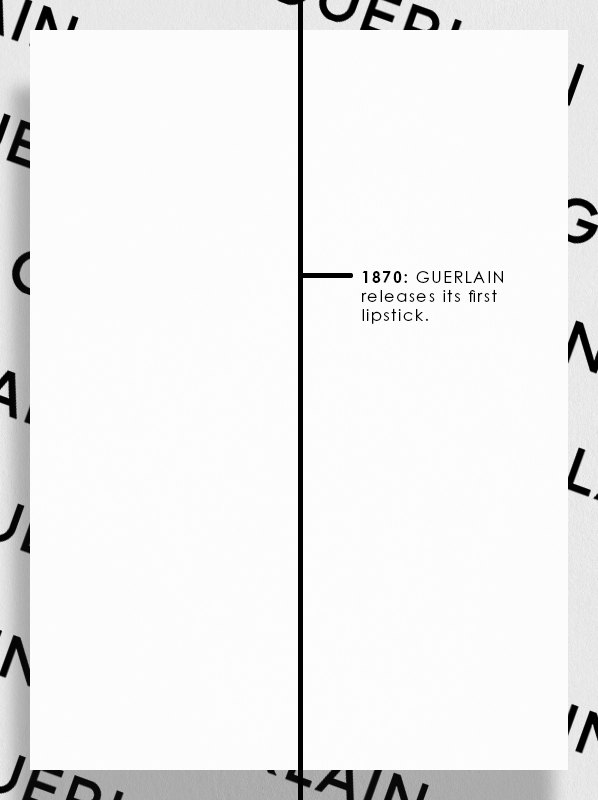 It’s not just fragrance that GUERLAIN are adored for; in 1870, they released the first-ever lipstick (AKA a lip formula in a tube). This key moment in the history of the house was honoured in the recent Rouge G Legendary Reds collection, as one of the lipstick shades is called 1870 Rouge Imperial, named after the year and the house’s muse, Empress Eugenie. 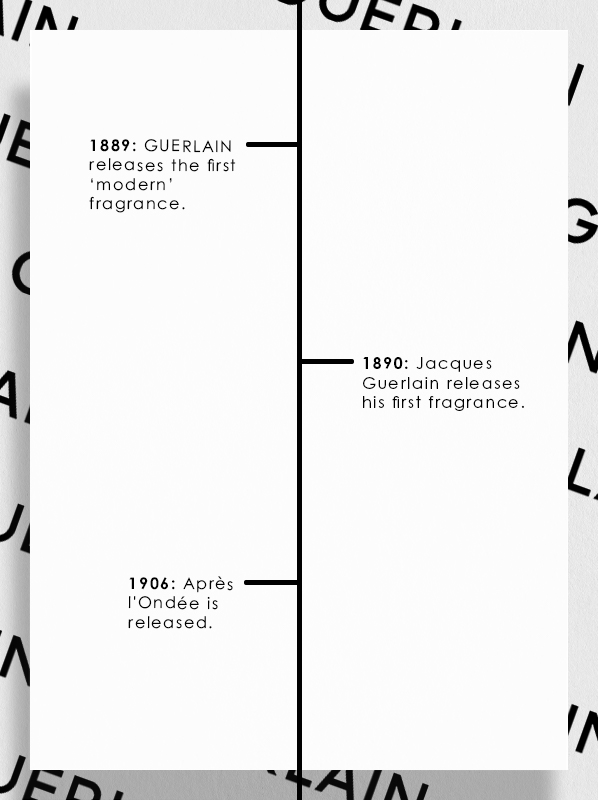 As GUERLAIN’s second generation in-house perfumer, Aimé’s greatest success is often viewed as his 1889 fragrance, Jicky, which is, of course, still a firm-favourite today. It was the first fragrance described as a “parfum” (as opposed to an Eau de Cologne), and also one of the earliest examples of a fragrance that used synthetic ingredients alongside natural extracts. It’s now deemed the first ‘modern’ fragrance.

As Aimé Guerlain had no children, he considered his nephew, Jacques, to be his apprentice and later successor. Jacques took the reins to create his first perfume, Ambre, in 1890 before being officially employed in the family business in 1894.

By this decade, the sons of Gabriel Guerlain, Jacques Guerlain and Pierre Guerlain, gained full control of the house and its vision. Naturally, Jacques took the reins as GUERLAIN’s third master perfumer, continuing the now well-established perfume tradition of keeping fragrance in the family. His first major success, Après l’Ondée, was released in 1906. 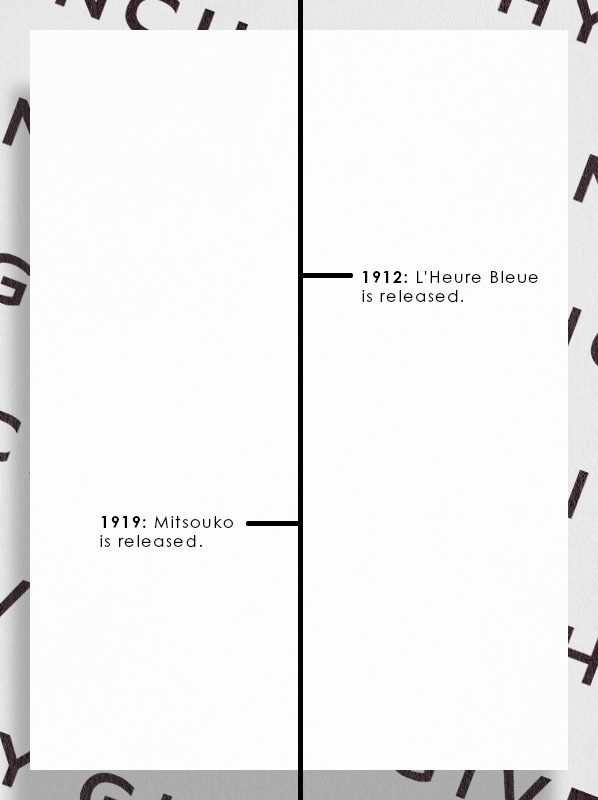 During the 1910s, there really was no stopping Jacques; he mastered a number of signature scents during this period, including the beloved L’Heure Bleue, which reminded him of his favourite time of the day: dusk, and the popular Mitsouko (1919). Both of these perfumes are still available today. 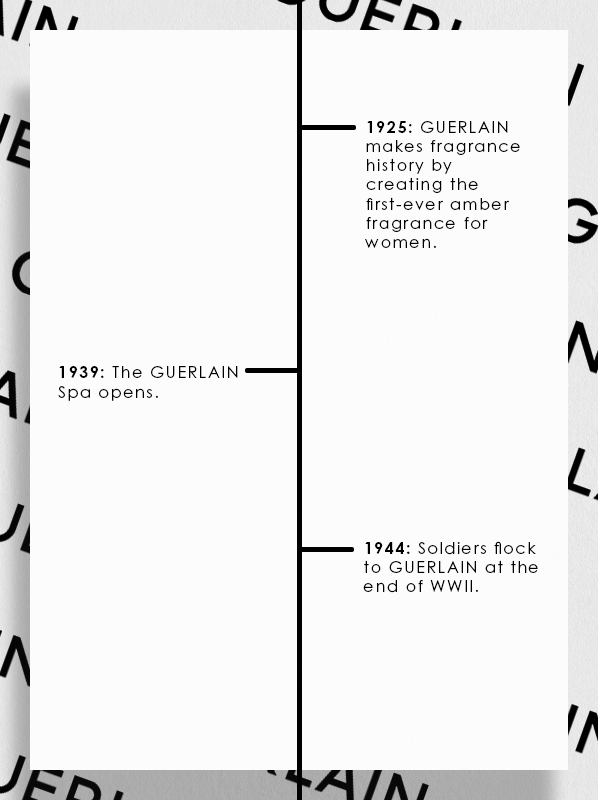 Would you believe that one of GUERLAIN’s current fan-favourite fragrances dates back as far as the 20s? In 1925, the Shalimar fragrance as we now know it was rereleased by Jacques Guerlain – Shalimar was deemed the first amber fragrance for women in the history of perfumery (although it’s important to note this is from a western perspective). The fragrance was sealed with a luxurious Baccarat crystal bottle.

In 1939, the GUERLAIN Spa at 68, Avenue des Champs-Elysées was opened (much to the joy of its visitors). The GUERLAIN massage method was born, which remains unique and exclusive today.

Sadly, GUERLAIN wasn’t spared during WWII. As victims of bombings and with a large percentage of its workforce conscripted, GUERLAIN’s factories stayed quiet a few years.

After the tragedy and loss of the war, the liberation of Paris finally came in 1944. It’s said that American soldiers stationed in France were seen queuing in front of the Champs ELysées’ store to treat their sweethearts to a touch of French luxury!

1950s: The Fourth Generation of GUERLAIN Is Born 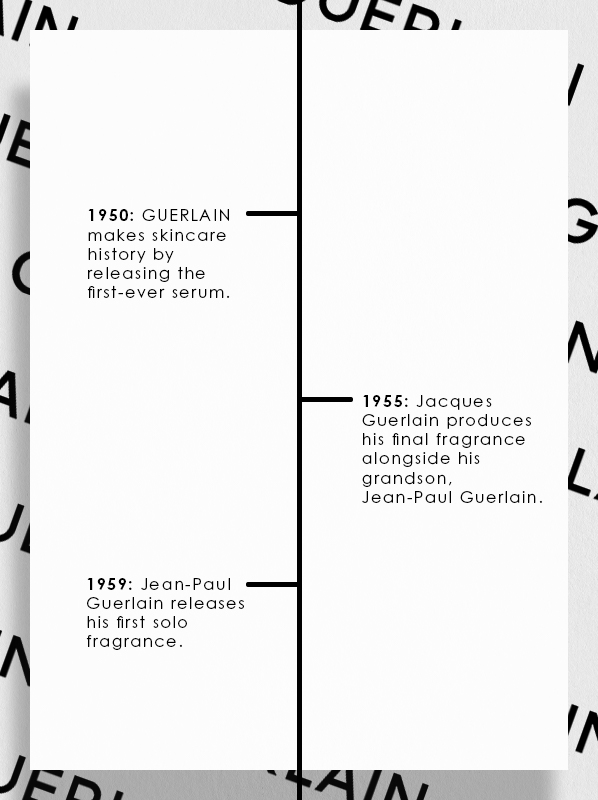 With so many fragrant creations, it’s easy to forget that GUERLAIN are also masters of skincare and makeup too – and yes, they’ve been experts in these fields for centuries. In 1950, GUERLAIN’s revolutionary Emulsion d‘Ambroisie was born. It is said to be the first known serum out there, paving the way for the future development of serums, as it was designed to be applied beneath face creams.

Five years later, GUERLAIN’s third-generation perfumer Jacques, created his last perfume: Ode. He crafted this perfume with the assistance of his grandson, Jean-Paul Guerlain, who was just eighteen years old at the time.

Four years later and as the fourth and final generation perfumer for the House of GUERLAIN from the family, Jean-Paul released the classic men’s fragrance, Vetiver, in 1959. This was his first solo contribution to GUERLAIN’s fragrance portfolio. 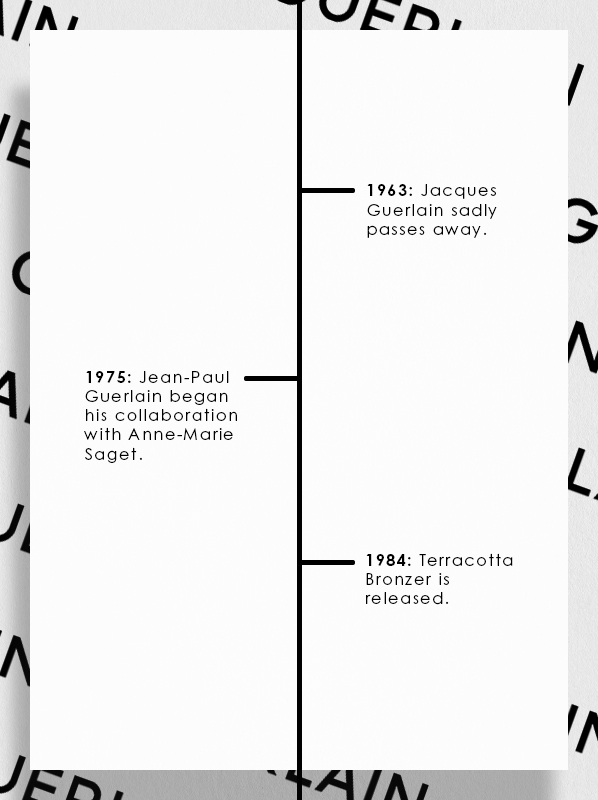 GUERLAIN’s third in-house master perfumer, Jacques, sadly passed away in 1963. Throughout his time with the House, Jacques was responsible for an impressive 400 olfactory creations, while also securing a home for the House on the prestigious Champs-Elysées. 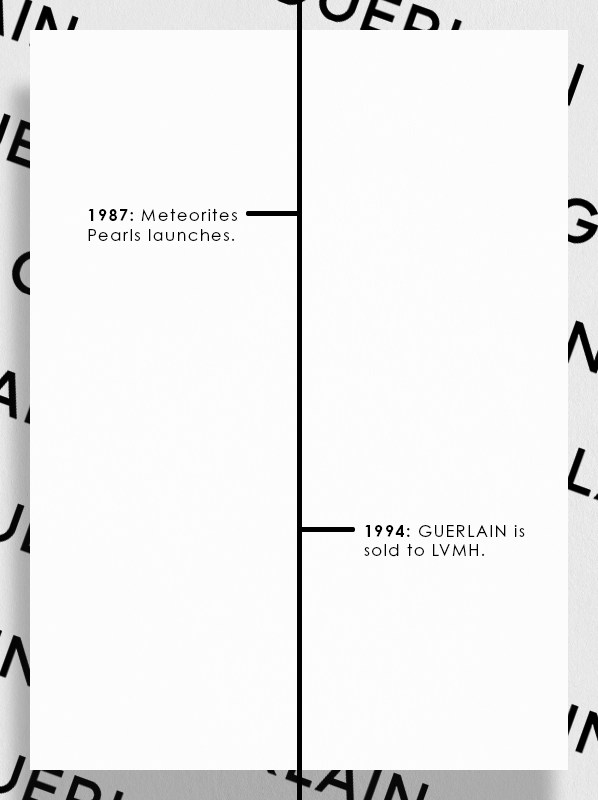 The 80s was a big moment for makeup. And GUERLAIN certainly didn’t sit back on their laurels and allow other beauty brands to take the spotlight. They showcased two revolutionary new beauty launches during this decade. Firstly, the now-iconic Terracotta Bronzer was born in 1984, the world’s first bronzing powder. Shortly after, the cult-classic Meteorites Pearls joined their portfolio in ‘87 – it was deemed the first-ever product to incorporate colored pearls to create luminosity and even out skin tone.

Although GUERLAIN was a family-run business for over 150 years, it was ultimately bought by French multinational company, LVMH, in 1994. After this, the GUERLAIN fragrance tradition ended; several other perfumers were brought on board alongside Jean-Paul Guerlain, including the likes of legendary Oliver Cresp, who was behind the 1996 Champs-Elysées. Although no one can deny Cresp’s perfume prowess, many fans of the house were sad to see that the family tradition could not be sustained.

Mathilde Laurent also began to work for GUERLAIN during the late 90s, becoming the first-ever female perfumer for the brand. She worked on some of the most beloved Aqua Allegoria fragrances, which offered a fresh new perspective for the brand, opening them up to an even wider audience.

Olivier Echaudemaison became GUERLAIN’s Creative Director of Makeup in 2000; he’s been at the helm ever since.

In 2002, Jean-Paul Guerlain retired as a master perfumer but continued to serve as an advisor for the next eight years. He oversaw Thierry Wasser, who was named as GUERLAIN’s in-house perfumer in May 2008. Still holding the position to this day, Wasser’s first fragrance for the house was Idylle – and it was an instant success.

You might remember GUERLAIN’s 2009 release: the Rouge G collection. It’s nothing short of iconic, offering you the chance to personalise your lipstick experience by choosing several shades and cases that you can mix and match.

Just one year later, a now-iconic GUERLAIN skincare line was launched: Abeille Royale, which tied into the brand’s love of bees by using the skin-regenerating properties of natural honey.

In the same year, LVMH dismissed Jean-Paul Guerlain following racist remarks on TV. Following his dismissal and with no remaining male heir to take over, the role of GUERLAIN’s master perfumer is no longer tied to family succession. 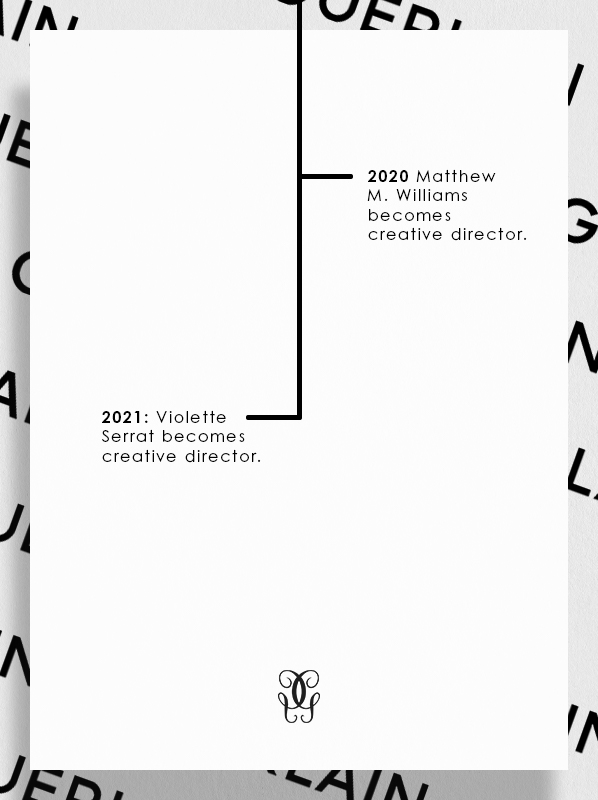 Like most premium beauty brands, GUERLAIN sees the importance of finding sustainable luxury solutions. Current GUERLAIN CEO, Véronique Courtois, explains the house’s desire to make ‘luxury synonymous with sustainability.’ This is being echoed across their products; in 2021, we saw the rerelease of the cult-status Terracotta Bronzer, which was revamped to offer a more sustainable formulation.

But perhaps nothing reflects this better than their devotion to the preservation of bees. To date, 125 million bees have been repopulated through their partnership with UNESCO.

Do you have a question about the history of GUERLAIN that we haven’t answered? Tweet us @Escentual with your query!

A History of Guerlain Fragrance Noses

This entry was posted on Tuesday, January 10th, 2023 at 9:00 am and is filed under History. You can follow any responses to this entry through the RSS 2.0 feed. You can skip to the end and leave a response. Pinging is currently not allowed.

@escentual Trying to make it to January payday... #Valentino We have so much love for Kristen McMenamy and @MaisonValentino… https://t.co/Lr664ECUEn
2 days, 22 hours ago • reply • retweet • favourite