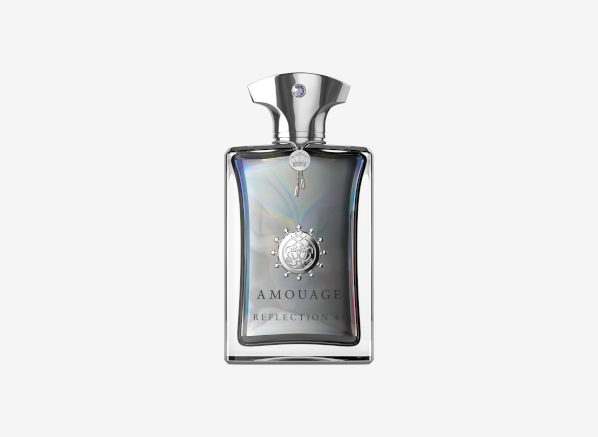 The first time I tried Amouage Reflection 45 Man Extrait de Parfum, I had to pause for a moment just to appreciate it in its purest form. And once I’d done that, I couldn’t stop myself obsessing over its highly skilful aroma. Learn more about its beauty in this review…

The note structure of Reflection 45 Man Extrait is surprisingly complex – but master perfumer, Lucas Sieuzac, has tricks you into thinking it’s surprisingly simple. Extrait is bold and confident but in an elegant way; it’s almost as though the fragrance has taken on a personality of its own (it doesn’t need to don a leather jacket to show you it’s cool – everyone already knows.)

Aged for four months, it feels as though each woody, floral and musk facet has grown into itself whilst still retaining a sense of freshness (as though the green notes have just been picked from the bud). Reflection 45 Man Extrait starts with an instantly fresh aromatic tone. Clary sage, juniper berry and lavender are to thank for that, which is very lightly spiced by cardamom and pink peppercorn. At the same time, vanilla-like benzoin softens and sweetens the scent for a gentle and more sophisticated take on aromatics. The heart leans into these sweeter facets slightly, mixing gourmand vanilla and tonka bean with a blend of white florals without feeling overly sugary or heady. Finally, the base reveals layer upon layer of luxury: vetiver, patchouli, sandalwood, cedarwood, myrrh, frankincense and opoponax.

A fragrance is usually made up of a concentrate (containing fragrant oils) and an alcoholic base. Some also contain a touch of water and additives. Fragrances with a higher fragrance concentration contain more perfume oils and less alcohol (and will generally last longer, too) because it’s packed with more fragrance oils.) To put this in perspective, here’s how much oil you’ll find in different concentrations on average:

But Amouage Reflection 45 Man takes things even further again – and there’s a clue in the name; it features a whopping 45% oils, resulting in a high quality aroma. So yes, the fragrance continues to celebrate the power of a man’s inner strength just like the original Reflection Man, but it now offers an even bolder and more potent fragrance to do so.

If you loved the original Reflection Man but you want your signature scent to go that extra mile, then you’ll love the Extrait version; its longevity is sure to impress you.

The brainchild of perfumer Lucas Sieuzac, Reflection 45 Man Extrait has an air of familiarity surrounding it when you first breathe it in, thanks to its aromatic touches and underlying creaminess. It reminds me of a herb garden on a late summer evening when the scent of leaves and greenery perfumes the air. But there’s also a hint of sweetness in the air.

To us, fragrance has no gender; as long as you enjoy wearing a scent, that’s all that matters. If you prefer to shop fragrance based on who it’s marketed towards, then it should be noted that this is marketed as a fragrance for men. I can see why, but I’d personally say that it’s more gourmand undertones make it universally appealing.

A deeper, richer take on Amouage’s 2007 Reflection Man, the Extrait is built around an impressive 45% concentration of perfume oil, so its fine quality scent is anything but short-lived. It lasted on my skin for 12 hours.

Like all Amouage bottles, Amouage Reflection 45 Man Extrait de Parfum feels like a prized possession. Once you remove the ornate golden lid of the box, the fragrance is revealed; it stands proud on a deep purple velveteen bed that feels fit for royalty. The flacon is sealed with royal touches as a crown icon is reflected throughout, while the pale pink jewel glistens on the lid. The double-walled bottle is dressed up in an iridescent shade that catches every shade of light, while the silver cap adds a cool finishing touch; it’s magnetised, but only when placed on the right way – if it’s placed on back to front, it repels, but when the pink jewel is facing forwards, the lid clicks into place with speed and efficiency – who knew a perfume bottle could be so good at showcasing the powers of magnetism?

This entry was posted on Thursday, October 6th, 2022 at 8:59 am and is filed under Fragrance Review. You can follow any responses to this entry through the RSS 2.0 feed. You can skip to the end and leave a response. Pinging is currently not allowed.

@escentual RT @bareMineralsUK: @cb478cb Hi CB, due to global supply chain shortages some items may be temporarily out of stock on our website. Luckily…
7 hours, 10 minutes ago • reply • retweet • favourite

@escentual Obsessed with #newbeauty? Catch up on our Instagram LIVE to hear the latest launches and upcoming #offers... LIVE… https://t.co/uy3cj1aBGV
1 day, 9 hours ago • reply • retweet • favourite